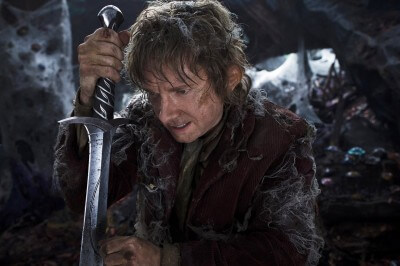 We are masters of cynicism, proudly sporting a black-belt in backlash. If this generation of critics, pseudo-critics and armchair-article-writing audience members given the bully pulpit of social media has any legacy, it will be bitching for bitching’s sake.

The Hobbit: An Unexpected Journey is awesome by the literal definition of the word, in that its relentless action, staggeringly nuanced performances and wholly “lived-in” environment once more give cause to sit slackjawed in awe. But since we’ve already seen writer/director Peter Jackson’s take on the series, the trolls that live in the blackest corners of the internet or the least syndicated columnists have been patiently waiting with baited breath to feast upon a series that brazenly dared to be both critically and commercially successful.

Once more teaming with writer/producers Fran Walsh and Philippa Boyens, and adding first-time writer and once-proposed director Guillermo del Toro, the fear going in to this first of an announced trilogy was a fear of blubber, fluff and fat. Basically, even if people were on board for Jackson once more feasting at the trough of Tolkien, taking three servings suggested greed and portended a cinematic sausage too stuffed with tasteless filling. If this first installment is any indication, nine hours may not be enough.

At a leisurely pace, we are introduced to young Bilbo (Martin Freeman) and reintroduced to Gandalf (Ian McKellen), who comes to the Hobbit’s Shire with an offer of adventure to reclaim a dwarf kingdom from a dragon. The dwarf posse may be small, but nobody should be Sleepy or Dopey on bad-asses like Thorin Oakenshield (Richard Armitage), the warrior king, or Balin (Ken Stott), the aged but savage, split-bearded ax-wielder. All parties get to know one another over a dinner with far too much flatulence humor, leaving Bilbo with a choice to stay sheltered or venture out into a great big world for such a tiny group of fellas.

Once the journey begins, Jackson is relentless. Giant raging wolf-dog-things, bloated trolls and waves of orcs and goblins relentlessly pound the group, with only the briefest of respites here and there. McKellen, who should at least be given an Oscar nomination (since no one takes those seriously anymore) as a gesture for having created such a legendary and lasting character, is the glue here, but Freeman is the star. His charismatic everyman who is slowly becoming the best version of himself makes Elijah Wood’s Frodo from the Lord of the Rings trilogy look positively cartoonish.

In fact, Armitage’s Thorin may well be the action equivalent of Viggo Mortensen when things are said and done, which is just another example of the series not falling off as so many expected/wanted it to do. It’s just under three hours, but it doesn’t feel that way, so complaints about length were cocked and loaded prior to admission, and the breakneck pace certainly does away with any concerns about too much straying to fill a run time.

Honestly, it’s a better and more complete movie than Return of the King or Fellowship of the Rings; heck, it may well be Jackson’s best film ever. If the overwhelming criticism is “sure it’s good, but we’ve seen it before” or “it’s good but there is too much of it,” those are just what compliments look like in an age of cynicism. The Hobbit: An Unexpected Journey is more of the same, and when “the same” is awesome, that’s a good thing.