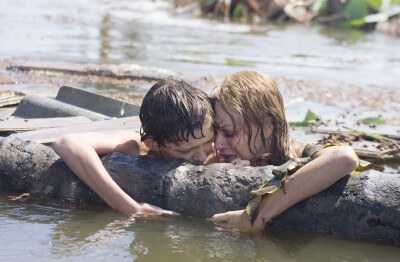 The 2004 tsunami that struck Eastern Asia was the sixth deadliest “act of God” in recorded history and quieted just under 300,000 lives. The first major motion picture to tackle the subject, The Impossible, is about a group of white folks who get injured and significantly inconvenienced while brown people all around them die in horrible fashion. This is equivalent to making a Holocaust movie about a family of Jehovah’s Witnesses who very nearly got taken to Auschwitz once but now run a nice online newsletter.

How deplorable are we as a people that the most palatable story we found attractive enough to tell stars the pasty Ewan McGregor and the quasi-translucent Naomi Watts? And as if it wasn’t enough to focus a story set in this maelstrom of human tragedy on tourists, the picture of the real family who inspired this film is shown over the credits: AND THEY’RE HISPANIC. Good God, how do you even process this as a movie when so much gut-wrenchingly vile cultural chaff is in the way?

Let’s pretend it’s possible to set aside the putrid and quasi-xenophobic trappings of The Impossible and focus on what director Juan Antonio Bayona and writers Sergio G. Sánchez and María Belón presented. Maria (Watts) and Henry (McGregor) take their sons, Lucas (Tom Holland), Thomas (Samuel Joslin) and Simon (Oaklee Pendergast), on a trip to Thailand at, quite literally, the worst possible point and time. When the wall of water hits, the family is scattered into two groups: Maria and Lucas assume that Henry, Thomas and Simon are dead and vice versa.

What follows is a relatively gorgeous, well-paced, thrilling and emotional look at survival in the face of absolutely inconceivable circumstances. Although Watts got the Oscar nod, Holland pretty easily gives the best performance in the movie, encapsulating quite perfectly a boy who became a man in the space of one natural disaster. Bayona’s film is spectacular to look at, engrossing to watch and horrifyingly simplistic and narcissistic to think about for any length of time.

There’s no denying this happened, and that the real event is a tally mark on the side of the ledger for believing a guiding hand is at work in this world. But knowing that this is the result, knowing that this family will, at some point, enjoy a miracle that 300,000 souls will never know trivializes the suffering to such a gob-stopping degree it is hard to power through.

The Impossible, as a movie, is actually pretty good. It is supremely well-shot, passionately acted and brilliantly paced. The Impossible, as a signifier, is horrifying. It suggests that white suffering is the worst suffering, that we are incapable of empathy for those who do not look like us and almost mocks the loss felt by so many families. There’s no doubt when the film was greenlit, a room full of suits envisioned the “Best Picture of the Year.” How wonderful to see them disappointed.