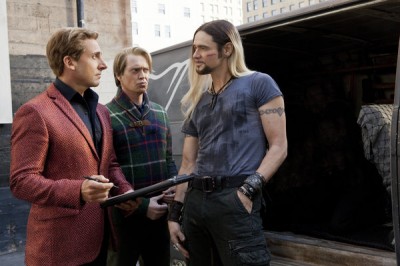 Like a scathing satire of the Soviet Union or a mockumentary musical on grunge, The Incredible Burt Wonderstone sets its eyes on an expired target of cultural derision nobody gives a fuzzy rabbit about anymore. Dressing Steve Carrell in a Siegfried and Roy bedazzled jumpsuit only works if people know who the hell Siegfried and Roy were. Criss Angel, known for targeting gothic youth, is closing in on 50 years old now. And David Blaine has finally returned to his home planet. You need a touchstone for parody humor to work and pop culture hasn’t touched magic acts with a ten-foot wand in seemingly forever.

What we’re left with is a comedy by committee: four writers, three well-recognized leads, one director with whatever the reverse of comic timing is and a not a single joke to be found. There’s a part in the film where the audience is drugged into unconsciousness and their limp bodies are moved around. To watch Burt Wonderstone is to envy the narcotic-induced coma the fictional audience got to experience.

In the first big mistake, Carrell plays the title character and Jim Carrey plays his rival, Steve Gray. When Wonderstone and his partner, Anton Marvelton (Steve Buscemi), go through a very messy split, Gray swoops in to seize a lucrative hotel gig from Doug Munny (James Gandolfini). That’s right, they gave the rich casino magnate the last name “Munny.” Get it? Because it’s pronounced like money! And he has a lot of money! It took four writers to do this.

With Wonderstone’s idol, Rance Holloway (Alan Arkin), and generic love interest, Jane (Olivia Wilde), trying to remind him of the childlike wonder that first drove him to magic, the potential for an interesting storyline opens up. Don’t worry, they avoid it. Had smarter people been involved, Gray would have been a stand-in for modern blockbuster films; the gorier he is, the bigger his stunts, the colder and less emotionally connective his routine becomes, the more popular he is. Meanwhile, Wonderstone could have been the old-timey classic motion picture, full of charm and grace, reliant on a heavy dose of humanity. Instead, the climax has Carrey go cross-eyed and talk like Ace Ventura after he was hit by darts.

Hell, even casting Carrey could have worked beautifully. If they had been smart enough to flip the roles. Wonderstone’s storyline is the former spotlight stealing superstar cast into shadowy obscurity and forced to debase himself for a check. If you haven’t seen Mr. Popper’s Penguins, be assured this is the storyline that is now guiding Carrey’s real life. If it wasn’t evident from the amount of time this review has spent discussing the myriad of things that could have happened but didn’t, what wound up on screen ought to disappear.

Like Joan Rivers, The Incredible Burt Wonderstone is boring, tired, dressed in horrid outfits and completely unfunny. It is a blip on Wilde’s and Carrell’s careers and another albatross placed around Carrey’s next. This movie best magic trick is turning a packed theater into a hushed mausoleum.  But other than that, it was great.