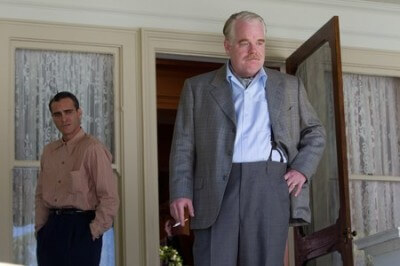 Writer/director/demigod of modern American cinema Paul Thomas Anderson—or PTA as his peeps call him—has a filmography so stunning that merely making a very good movie means it’s his worst one yet. So, with a heavy heart comes the news that The Master isn’t outright the best film of the year; it’s only one of the best films of the year. Step up your game, PTA.

What keeps this Scientology-tinted dual character sketch from the same instant-classic status the director seems to notch each time out is part repetition and part lack of execution. After creating Daniel Plainview (There Will Be Blood) and Barry Egan (Punch Drunk Love), there was really no need to explore another erratic, emotionally volatile, self-destructive, human time bomb. And if you’re going to cast the luminous and charming Amy Adams, maybe give her more to do than scold Joaquin Phoenix and tastefully pose nude with a prosthetic pregnancy belly.

That sounds harsher than it needed to solely because if you don’t put the minor criticisms before the effusive praise when talking about The Master, there’s no way it sounds anything other than breathtaking; and again, it’s only almost breathtaking. The center of the film is Freddie Quell (Phoenix), a hurricane of a man fresh from the second Great War ready to destroy himself in the absence of new military enemies. When he’s not gargling rocket fuel or paint thinner to get wasted, he’s breaking something or copulating with someone.

When he stows away on a ship owned by Lancaster Dodd (Philip Seymour Hoffman), the creator of a familiar cultish pseudo-faith that may as well be called Schmientology, Freddie is inexplicably taken in by the blossoming quasi-religion. The dynamic between Lancaster, the narcissistic shepherd in search of a flock, and Freddie, the massively lost lamb looking to belong anywhere that will have him, is hella gripping. Every scene between the two feels like it may end with the latter murdering the former or the former actually saving the soul of the latter.

The problem is that the thesis is as depressing as it is anti-cinematic: you can’t and won’t ever change who you really are, not even with the power of the alien overlord Xenu. Because The Master is relatively plot free, having two characters more or less stay the same is frustrating, which is likely PTA’s point, but that doesn’t make it any more palatable.

The criminal misuse of Adams as a petulant shrew aside, there are various flat-out brilliant elements, including an inspired riff on the mythical sailor and tortured prophet motifs. Hoffman is uncharacteristically restrained, whereas Pheonix gives a sneering, mumbling, terrifying performance that makes it impossible to imagine that an average day in his life isn’t like a peyote hallucination. So now you see why the critique had to come first, as it’s hard to call a near-masterpiece a disappointment.

The Master is really very good, but much as Wes Anderson’s Moonrise Kingdom marked the end of what he can squeeze out of his familiar themes, hopefully this is the denouement of PTA’s lovesick psychopath period; an artist this talented has so much more to explore.