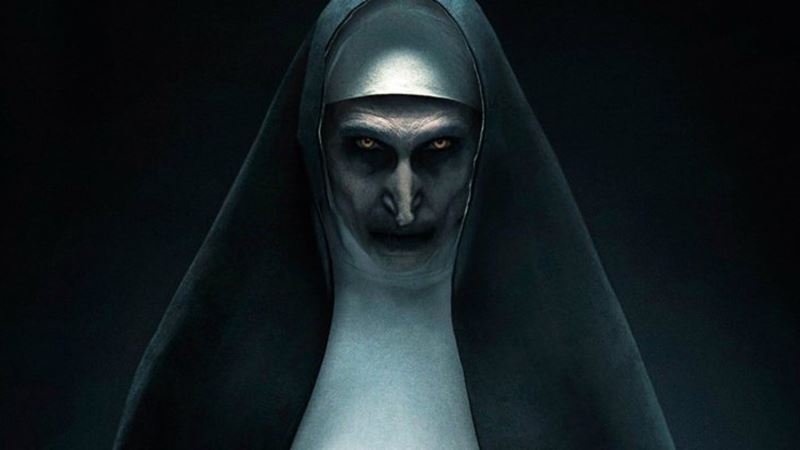 When three-cliches-standing-on-each-other’s-shoulders-wearing-a priest’s vestments, Father Burke (Demián Bichir), finds a set of books covered with satanic symbols buried atop a nun’s corpse, he asks aloud if maybe the answers to the unholy shitstorm he’s in could be in them. The problem with movies like The Nun is that they treat their core audience like half-witted pudding brains.

It’s perfectly fine that Hollywood has realized it doesn’t have to bust a bitcoin on such budgets; however, the disrespect for the intelligence of the scary-movie fandom that is woven into nearly every studio script is blatant and palpably insane. Indie horror is clever, weird, vibrant and progressive in fascinating and challenging ways. So why do blockbuster horror franchises pat ride-or-die genre enthusiasts on the head as if to thank them for not eating glue between jump scares?

The Nun is a sloppy cash-grab that further dilutes The Conjuring brand, a cinematic universe that is hilariously more profitable than the DC comic book umbrella. Based on the painting of a mascaraed emo nun from The Conjuring 2, the film is set in a cloistered convent in 1952. After the body of a sister who died by suicide is found, Vatican City head honchos dispatch Father Burke and Sister Irene (Taissa Farmiga) to determine if the “grounds are still holy.” The idea that the Catholic Church would more rigorously investigate the potential of a demon being farted into our reality and not priest-based evils is upsettingly the film’s most plausible conceit.

With the help of a local villager who goes by “Frenchie” (Jonas Bloquet), Burke and Irene spend a few nights in the convent, which has to have the worst reviews on Yelp. Writer Gary Dauberman just kinda tossed in whatever semi-spooky nonsense popped into his head without any regard for consistency or meaningful payoff. Every backstory is hackneyed gibberish and every jump scare is so telegraphed by director Corin Hardy that the most frightening thing about The Nun is how much money it will make anyway.

It should come as no surprise that a movie directed by a guy wearing a fedora in his IMDB profile picture features a scene where a woman’s own holy visions are explained to her. Seriously, she needed a dude to tell her that a statue of the Virgin Mary with a glowing finger was the reason she repeatedly heard a voice in her head saying “Mary points the way.” Did you know that women constitute a statistically dead-even amount of die-hard horror fans? Enjoy the ESP mansplaining!

What’s maddening is that The Nun flirts with Hammer horror elements that could have pushed things into delightfully campy territory and suggested—if only by the very nature of casting Vera Farmiga’s sister—at a meaningful connection with The Conjuring series. Nope! The Nun is lousy, lazy exploitation of a fervent and loyal fanbase and a complete waste of time for anyone who isn’t a horror film completist. The silver lining? Hereditary just hit home video, y’all!