Home » Film » When Lapdogs Were Watchdogs 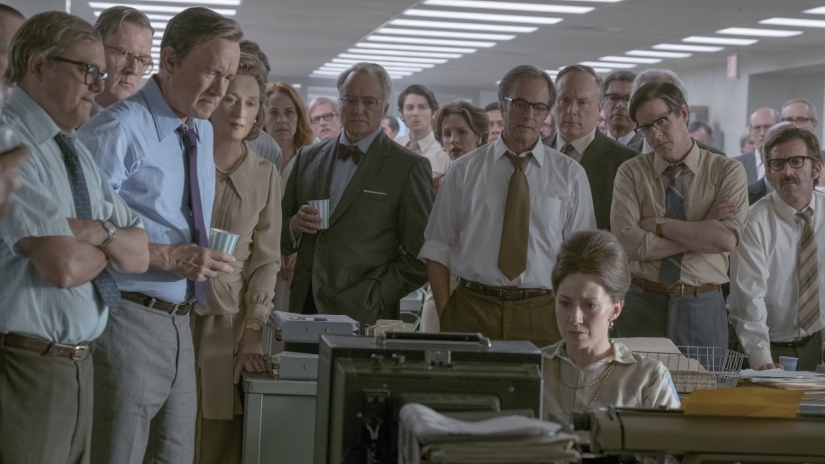 Of all the questions The Post raises when considered through a contemporary lens, the most surprising are “Why is Tom Hanks constantly posing like he’s in a slutty Dockers ad?” and “Shouldn’t this movie be, you know, better?” With a thesis that’s both red meat to us liberal lions and a timely wake-up call to a country content with a largely toothless and sycophantic press, The Post’s conclusion should have been either a stern rejoinder to “do better” or a soaring reminder of when we were better. Instead, the whole thing is a muted contemplation seemingly targeted at those exceptionally few Fox News viewers who can still be saved.

At the center of The Post are the Pentagon Papers, a leaked governmental report that revealed multiple presidents and scores of officials lied to the public about the truth behind the Vietnam War. Because many white American boys from middle and upper class families died in that conflict, the public was outraged by the revelations. This is in contrast to when more recent reports detailed how we killed tens of thousands of Iraqis because of imaginary WBDs, and nobody gave a shit. So it’s not just the journalists who lost their integrity, as the movie probably should have explored.

At any rate, the film is a methodical exploration of the decision by then-owner of The Washington Post, Kay Graham (Meryl Streep), to allow her editor, Ben Bradlee (Tom Hanks), to publish the top-secret documents despite threats from Nixon and his cronies. Because we know they did publish them, the 90 minutes of discussion about whether they should publish them feels like a labored analysis of whether someone should eat chocolate cake when their face is already covered in frosting. The final act seems set up as a welcomed pivot to a courtroom drama, in which lawyers will tie a bow on the sacred responsibilities of a free press. Instead, more time is spent watching Streep enter and leave the Supreme Court, and the final verdict is repeated by someone hearing the results by phone.

Maybe that’s the best analogy: The Post is like the game of telephone played with a truly important, timely message. Sure, you can recognize the point by the time it gets to you, but it feels like really odd things were inexplicably added in translation. Things like Graham’s anti-boy’s-club bravery being dramatically undercut by an insipid monologue to her daughter that waxes nostalgic for a simpler time, back when her rich father gave her rich husband all the responsibility and she got to just make babies. Even watching as competing publishers put aside corporate profits in solidarity to serve the greater good of informing the people lands with the force of a mumbled “Hey, that must have been nice.”

Save for Streep, everyone in the movie talks with a goofy, affected accent and leaves no imprint, with Hanks playing footsie with an outright stinker of a performance. And yet, the message is so crucial, the weight of the increasingly forgotten journalistic obligation is so heavy, that The Post still winds up a must see. Again, maybe Spielberg didn’t make this movie for those of us already thumping our chests and flogging social media with demands for accountability. Maybe he crafted this message for those relatives who won’t read what we ask them to read but may watch a nice movie by that nice Steven Spielberg with that nice Tom Hanks about a nice idea without which very mean things happen.