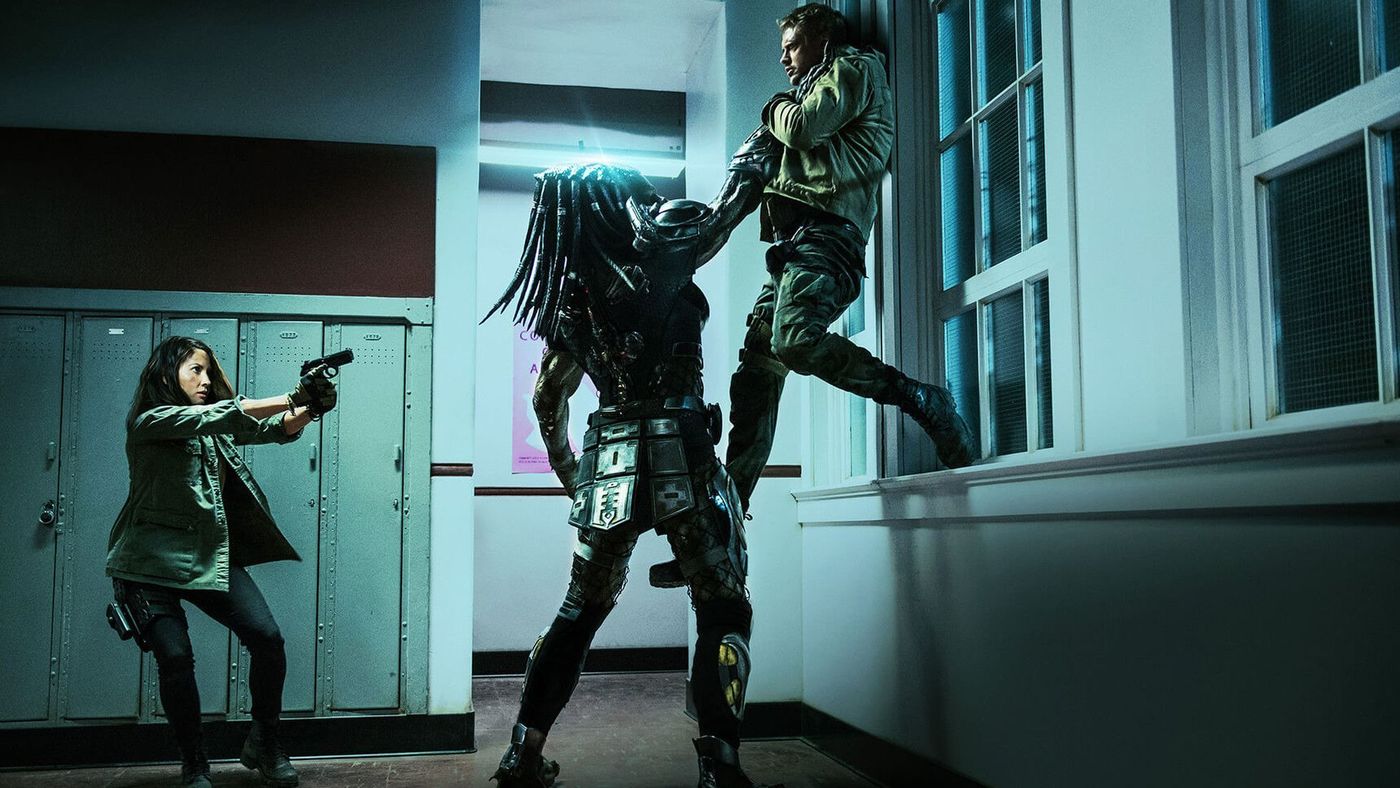 Presumably written by a pile of sentient cocaine that is seeking vengeance for the downfall of the Playboy empire, The Predator is somewhere between a satire and an homage of shitty 1980s action movies. Would that it were a true parody of nostalgia pornography, poking fun at the legion of manbaby fanboys desperate to relive the pop culture joys of youth. Seriously, how much of the fervent fury with which some folks cling to certain intellectual properties is just a raging against their own mortality and recognition they’ll never be what they dreamed of being when they were watching movies at that age? Anyhoo, The Predator is strange and bad! But it’s also almost stupid-good at times…

A big predator chases a littler predator across space and onto earth where they are both shot at by a group of soldiers, a government prick and a scientist who is given about three chances to explain her purpose in this movie and fails every time. The lead soldier person is Quinn McKenna (Boyd Holbrook), who was given a name that purposefully sounds like an Arnold Schwarzenegger character and was given a hairdo that appears to be personally cut by Arnold Schwarzenegger. We know he’s a real good military fella because one of the two times his wife (Yvonne Strahovski) gets to actually talk with words, she barfs out a memorized list of his amazing accomplishments.

McKenna’s buddies are a group of soldiers with mental health issues. You know, because nothing screams “escapist sci-fi romp” like mocking veterans with PTSD. Without any possible question, the worst thing that writer/director Shane Black did was when he cast a friend of his who is a registered sex offender and put that sex offender in a scene with Olivia Munn. It was deleted prior to release because Munn spoke up, not because Black grew a conscience or anything. However, it’s a really tough call what the second worst thing he did with The Predator was.

Was it:(A) finding a truly nonsensical plot reason to have Munn strip naked while watching a predator explode human beings, (B) treating autism as a literal evolutionary superpower by trafficking in the worst stereotypes about the condition, (C) making the uber-talented comedian Keegan-Michael Key spew purposefully unfunny “your momma” jokes or (D) writing a character afflicted with the TV/movie version of Tourette syndrome, where he yells a sexual act he’d like to perform at Munn’s character?

Were it not for the garish, deliberate insensitivity, The Predator would still be caught between mocking/imitating sci-fi action flicks of 30-40 years ago and trying to legitimately restart a major studio franchise. And yet, some moments are so gleefully goofy and self-deprecating that it’s hard not to enjoy certain weird bits of this amalgamated mess. It’s like truly and profoundly appreciating the pancreas of Frankenstein’s monster. The Predator is a lumbering monstrosity almost certain to finally remove and sever the spinal column of a decades-spanning franchise that has survived solely based on a solidly weird character design. The world is no worse for its demise.