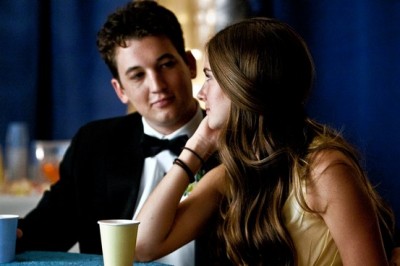 Another slobbery wet kiss to white privileged coming of age, The Spectacular Now asks us to believe, among other implausible things, that Shailene Woodley, one of People Magazine’s 2012 “Most Beautiful People at Every Age,” is some kind of Annie-Average-Plain-Jane.  Look, nobody expects sensitivity or realism from Hollywood, but encouraging average young women across America to believe this is the cultural standard for subpar beauty is sick, even for them. And it’s not some throwaway component of the film, it’s a major plot point, as characters routinely ask Sutter (Miles Teller) why he’d be slumming it with Aimee (Woodley).

The real question is why anyone would be interested in Sutter, a boorish borderline alcoholic who is popular seemingly because he’s oblivious to how unpopular he should be. His single mother, Sara (Jennifer Jason Leigh), works crazy shifts as a nurse to care for him; his sister, Holly (Mary Elizabeth Winstead), is held up as a figure for ridicule for settling down with a wealthy lawyer who can care for her and his ex-girlfriend, Cassidy (Brie Larson), is implicitly criticized for moving on too quickly after their breakup despite the fact he’s a letch who sneaks alcohol at work and her new boyfriend is pretty awesome.

Why anyone would root for Aimee and Sutter to get together speaks to a bizarre nostalgic need for unremarkable male losers to fantastically rewrite the past and get the girl they shouldn’t. Sutter is terrible to Aimee, who he befriends as an act of pity. Although she encourages him to heal from abandonment issues due to his father (Kyle Chandler), we don’t even see Aimee’s comparable scene. Having made a pact to both stand up to their mothers, Sutter’s story plays out for 45 minutes while Aimee mentions her experience in passing. If there’s a moral expressed here, it’s this: All y’all ladies should help fix your men and take care of your own damn selves while you’re at it.

Teller and Woodley are talented actors adrift in hackneyed, simplistic, overwrought obviousness. The most startling thing about The Spectacular Now is that people seem to like it. If you can get past the “uglification” of Woodley and the uneven distribution of romantic responsibility, it is a completely average experience indistinguishable from a thousand other films content to hold young people with few real problems up as an example of how we all suffered into adulthood.

Okay, so this all sounds really, really negative. And it is. But the final take home of what director James Ponsoldt and writers Scott Neustadter and Michael H. Weber did isn’t a fist shake but a shrug. The Spectacular Now is the second film in the last few months to give the “indie darling” treatment to a subject unbecoming, as it joins The Way Way Back in the “unremarkable coming of age” club. Oh, and a quick shout out to Kyle Chandler, who does finally deliver a performance distinct from his role as Coach Taylor on “Friday Night Lights.” Even if that’s not exactly the final thought the filmmakers probably wanted a review to end on.