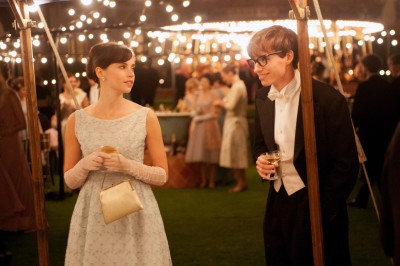 In 1965, Stephen Hawking wrote his first ground-breaking thesis and wed Jane Wilde. His paper argued that if a star can collapse inwards to form a singularity, then a singularity can explode back outward. The Theory of Everything explores this same theory, only instead of stars, it’s marriage. Which isn’t to say new “stars” aren’t formed; Eddie Redmayne and Felicity Jones both provide sensational performances in The Theory of Everything, even as director James Marsh falls back on some tired cliches.

Although hard to imagine without his motorized wheelchair, the film opens with Hawking cycling on his way to a party with graduate student friends. There, Hawking (Redmayne) meets Jane (Jones), a fellow student at Cambridge. He charms her with scientific facts and quirky smiles until all but a few have retired for the night. Hawking is surprised when a phone number is thrust his way upon her exit. Thanks to Redmayne, Hawking’s lack of social graces doesn’t feel contrived but reveals a dual nature: He demonstrates mental acumen by solving “impossible” equations for his astonished professor (David Thewlis) and yet considers his parent’s house a suitable first date. Ultimately, the optimism of young love prevails, enhanced for the audience by a strong chemistry between the actors.

Then comes Hawking’s ALS diagnosis… As with the rest of the film, writer Anthony McCarten doesn’t turn things into disability pornography. Previous scenes serve as building blocks to garner sympathy, but characters are allowed to express genuine feelings. In one impactful montage, Hawking attempts to play croquet with Jane after his diagnosis. Each hit of the ball and tremor of the hand conveys repressed anger. She watches in tears, then joins him later in his torn-apart room, determined to stay for the duration of his illness.

Over time, Jane’s role becomes that of a caretaker, as three children are born and her husband’s illness progresses. Marsh deftly shows this through costume changes and muted filters. At this point, a church choir director, Jonathon (Charlie Cox), becomes a pivotal third party. Instead of exploring the messy and fascinating emotions that accompany Jonathon, and later Elaine’s (Maxine Peake), entrance into the Hawkings’ lives, events are glossed over in favor of fictional Super 8 home movies. Although the package will be satisfying for most, Jane’s 2006 memoir (upon which the screenplay is based) reveals missed opportunities for richer, truer reflection.

This doesn’t mean the film is a failure. On the contrary, as someone who has watched the devastation of ALS firsthand, I can attest that Redmayne’s physical performance was so accurate as to be difficult to watch. His curled fingers stirred personal memories with their bend. His slurred speech naturally progressed, with a genuine gradual head tilt and realistic stumbles. The performance isn’t simply amazing, it is well-informed and a stunning achievement.

The Oscar buzz trailing the film is warranted, if only so far as the performances are concerned. What the script lacks in drama, the cast more than makes up for it with heart. The Theory of Everything doesn’t have it all, but it does have more than most.