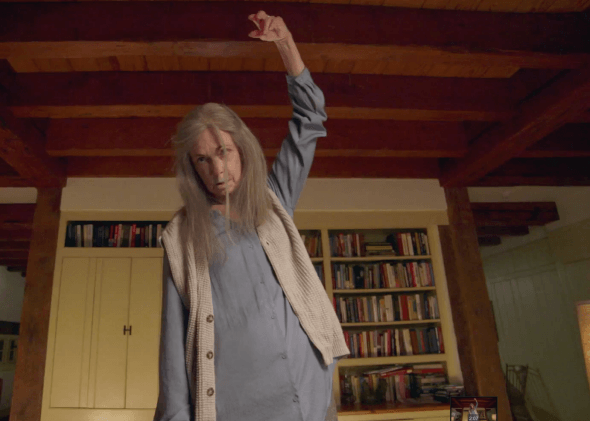 For the first time in over a decade, director M. Night Shyamalan has made a film that won’t end up on many “worst of the year” lists come late-December…but will probably be forgotten by early next week. The Visit is a horror film presented in the cheap “found footage” style that dominated the genre just a few years ago before disappearing overnight, with the exception of a couple low-key franchises. After the string of missteps that crescendoed with the fantastic feat of somehow putting Will Smith in a film worse than Wild Wild West, for Shyamalan to give us something this middling almost seems merciful.

The Visit follows a pair of young siblings visiting their estranged grandparents for a week at their creepy, isolated country home with an appearance that screams: “Horror movies be happening here!” In true found footage style, the siblings must record the entirety of their experiences for reasons that are not-at-all completely, obnoxiously and awkwardly forced. Shyamalan’s choice to use the found footage technique here is confusing because it adds nothing and is even abandoned at times for traditional cinematic elements like a musical score.

It’s clear from the get go that we’re in for another one of those infamous Shyamalan twists and that, for the first time in however many Shyamalan movies, the laughs are going to be intentional. It’s not long before the kids realize that there’s something seriously wrong with Nana (Deanna Dunagan) and Pop-Pop (Peter McRobbie). The film is at its best when toying with the generational disconnect we’ve all felt while spending time with our elderly loved ones. The Visit is a hard horror-comedy and, in moments, it’s really funny. One moment in particular, a game of Yahtzee from hell, is even downright hilarious and perhaps the most cleverly staged scene this year.

But when The Visit tries to be an actual horror film it’s just…lame. Remember that Shyamalan twist I mentioned? Well, Shyamalan spent so much time meticulously establishing a red herring that he didn’t seem to realize there’s a dead giveaway for the big reveal in the first twenty minutes of The Visit. It shortchanges the tension when most of it is built on the mystery of trying to uncover what exactly is wrong with Nana and Pop-Pop, but it’s plainly spelled out for you at the end of the first act. Shyamalan’s over-reliance on gross-out gags (like five bloody farts) doesn’t help the scares much either.

The big takeaways from The Visit are that the young leads (Olivia DeJonge and Ed Oxenbould) are newcomers to keep an eye on and that M. Night Shyamalan might be headed back on track, even if he’s still in need of one or two significant course corrections. As far as found footage horror movies go…yeah, we don’t need any more of these. Unfortunately, I saw a trailer for yet another Paranormal Activity movie before The Visit, so we are absolutely going to get some. I’ve never bought the argument that the found footage style grounds horrors movies in reality, and judging by how dated its usage felt in The Visit, it’s fair to say that the technique has overstayed its welcome.