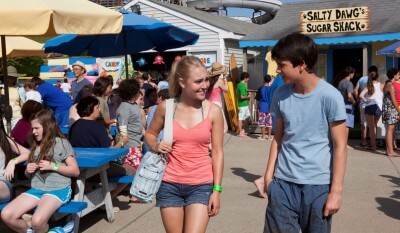 Quirky, charming dramedies about awkward, white, privileged suburban teenage boys coming of age are legion. It’s almost as though awkward, white, privileged suburban teenage boys went on to run Hollywood, elevating their innocuous and largely insignificant narratives as somehow more important. We get it: people used to make fun of you for being weirdly shaped and now you can buy a private island and make those former bullies kill each other, Hunger Games style. It doesn’t mean you have to rewrite personal history so you can finally make out with the gorgeous young girl who freaked at the thought of your wiener.

The Way Way Back is to indie comedy what a Jason Statham movie is to the action genre: reliable, predictable and filled with awkward sexual tension. The same people who treated the generally banal Little Miss Sunshine with undue reverence are likely to see what writers/directors Nat Faxon and Jim Rash have done here as somehow special. Just because middle class people like to remember puberty doesn’t mean the movie actually has anything to say.

Faxon and Rash co-wrote The Descendents with Alexander Payne, winning an Academy Award for it, so there was reason for optimism. Reason that was crushed beneath a title wave of cliches and placeholders where characters should be. Watch: Nerdy Teen (Liam Jones) goes on summer vacation with Single Mom (Toni Collette) and Jerk Boyfriend (Steve Carell). He meets Hot Girl Next Door (AnnaSophia Robb), whose Wacky Mom (Allison Janney) says dirty things a lot. Luckily, he meets Cool Role Model (Sam Rockwell) at a local waterpark. Cool Role Model sees Nerdy Teen for the person he really is, so he puts him on the staff, giving Nerdy Teen a place to go when Jerk Boyfriend does bad things to Single Mom.

There are lots of other minor characters that you would expect would be in there, like Mean Potential Step Sister (Zoe Levin) and Wacky Fellow Employees (Faxon and Rash). Every character can be reduced to a simple, short descriptive noun, just as every emotion is telegraphed with invisible subtitles like “you should feel sympathy here.” It’s more obvious than offensive, although there is a “black kids breakdancing who respect Nerdy Teen for trying to learn their funky moves” scene that is as cringe-inducing as scenes where Faxon and Rockwell stare at teenage girls’ butts. It’s not adorable or funny if it makes you feel ooky.

Honestly, The Way Way Back is way way unnecessary more than it is anything else. You could overflow every landfill in New Jersey, a state known for its connection to trash, with the number of literary and cinematic tributes to this particular brand of “coming of age.” Give me 10 movies like Pariah, where a young black lesbian has to confront her sexuality and parents’ disapproval, before you give me one more pale scoliosis patient pining for a girl who can do way better.