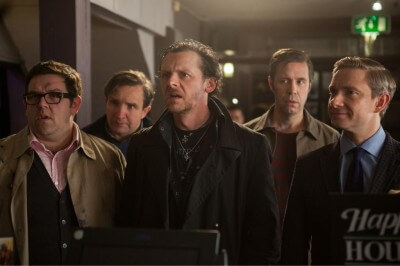 The best comedy of the year also indicts our cultural obsession with nostalgia, presents a character who legitimately recently attempted suicide  and contains a final 10 minutes rich enough to fuel a dozen sequels we will tragically never get. The World’s End is the latest in a tiny group of movies that brilliantly parody a specific genre while still functioning within that genre. Joining Shaun of the Dead, which mocks zombie movies and is a hell of a zombie movie, and Hot Fuzz, which picks on buddy cop movies and is a great buddy cop movie, The World’s End ridicules apocalyptic invasion movies and serves as a great apocalyptic invasion movie.

The connection? Writer/director Edgar Wright and writer/actor Simon Pegg, along with hilarious supporting star Nick Frost have completed their “Cornetto trilogy,” which includes the three films mentioned above, joined together only by the three men mentioned here and the inclusion of a Cornetto ice cream snack in each film. As far as narratives that connect a series of films, it still beats The Fast and the Furious.

This time out, Pegg plays Gary King, a grown man who peaked in high school. Deciding that the pivotal moment of his life was not completing an epic crawl drinking a pint in each of 12 pubs along a mile-long stretch in his hometown, Gary cons his friends into attempting it again as they near their 40s. Reluctantly, Andy (Frost), Oliver (Martin Freeman), Steven (Paddy Considine) and Peter (Eddie Marsan) accompany their former leader back to stretch their bladders in a quest of no significance to anyone but Gary. And then when they get there they find the town is crawling with killer robots that have blue ink for blood and have replaced the townsfolk. Typical “you can’t go home again because home is overcrawling with murderbots” story, really…

Gary is a man being devoured by nostalgia. It’s not just memories or living in the past, it is a fetish of casette tapes, band T-shirts and juvenile adventures. Wright, Pegg and Frost are speaking directly to their core fans, adults who still trek to ComicCon, and telling them to put their lives in order. Thankfully, laughter helps the medicine of truth go down, and audiences will barely know what they swallowed until their bellies are full. It’s not surprising for a team whose first effort, Shaun of the Dead, set a legitimately emotional death sequence during an ongoing sight gag. Apparently, British comedies can do two things at once while most American comedies insist on doing number two at least once.

The final scenes of The World’s End are a testimony to the imagination and unconventional artistry of this triad. Somehow a movie that starts with the silliest stakes in the world ends up with the world at stake, and that’s more than just funny, it’s brilliant. They haven’t sworn some pact never to work together again, but it’s sad to know that the group has semi-officially declared this the end of their unofficial partnership. What good times we all had together, but it’s time to move on.