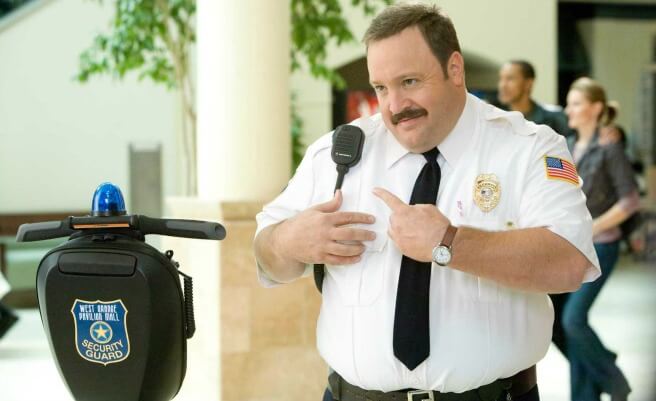 Six year ago, we vibrating-forked over almost $150 million to watch inexplicably bankable star Kevin James flail around a PG-rated comedy about an overweight mall security guard who—get this—took his job as seriously as an actual police officer. Ha! We did that and we have to own it. Now, like a reminder that our past tends to catch up with us, James has stretched the self-righteous security guard joke into a second feature film. And it’s the worst thing that could have happened.

Directed by Steve Carr and co-written by James, Paul Blart: Mall Cop 2 rips a few storytelling beats from The Muppets (2011) and introduces us to a world where Paul Blart is struggling to become relevant again. This time around, Paul Blart finds himself called to a mall cop convention at a Las Vegas hotel, where he stumbles upon a plot by some bad guys to steal a priceless art collection. Paul Blart seizes the opportunity to save the day and prove to the world that he’s still a worthwhile do-gooder. But he’s not a worthwhile do-gooder.

Mall Cop 2 proves that Paul Blart is a whiney, frustratingly inept, misogynist do-gooder who deserves to lose his struggle for relevance. Oddly enough, just like The Muppets acknowledged how the real world seemed to have outgrown Kermit the Frog, Mall Cop 2 frames Paul Blart as some significant comedy icon from the childhoods of millenials who have, sadly, outgrown him. Nope! Nobody forgot about Paul Blart because they outgrew him. Everybody forgot about Paul Blart because Paul Blart: Mall Cop was a terrible, disposable comedy that came out in January (“bad movie dumping season”). Paul Blart: Mall Cop 2 coming out in 2015 has as much purpose as a second Zookeeper movie coming out in 2018, and its phony attempts to invigorate a sense of nostalgia for it’s titular character are sort of gross.

What surprised me most about Mall Cop 2 was how much time it spent alone with Paul Blart, and just how quickly Paul Blart’s presence began to grind on me. After pushing the joke he embodies to its limits and subjecting him to desperate gags that I’m surprised James wrote for himself, Mall Cop 2 revealed a particularly ugly side of Paul Blart. In two scenes, Paul Blart reveals his misogynist attitudes by (1) slut shaming his daughter before discouraging her to attend college, and (2) ridiculing a woman for not being flattered by harassment from Paul Blart’s drunk friend. For the most part, Mall Cop 2 is terrible but harmless. During these scenes, the film gets just plain icky.

Look, this is a film that just tries to make kids laugh. Please don’t need to take your kids anywhere near it. Although the jokes were allegedly meant for humans much younger than me, all I can picture is kids being bored. The Die Hard scenario that prompts Paul Blart to start falling down a lot doesn’t even kick in until the last 15 minutes anyway, so your kids will only get to laugh at Paul Blart for a fleeting few minutes before they forget about him all over again.