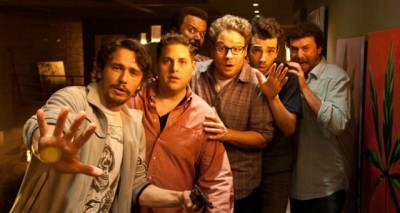 Yes, you’re reading a review for This is the End, a comedy so profane it manages to defile Satan. Think about that for a second; this is a comedy so epically vulgar, so cataclysmically obscene that it defiles the greatest fictional defiler. It is the furthest point on a map from Puritanical. Reviewing a comedy is hard; you don’t want to just repeat and reveal jokes. Besides, the only thing that really matters is whether or not it’s funny. This is the End is funny. Very funny. Far and away the funniest movie of the year. So instead, let’s talk about rape jokes.

One quick plot synopsis for context before we get there. The setup is that every actor in the movie plays themself. This includes Jay Baruchel and Seth Rogen, friends who are growing apart at the film’s outset. Rogen gets Baruchel to go to a party at James Franco’s house so he can get to know his new friends, Craig Robinson and Jonah Hill. Things get expectedly self-referentially insane; Danny McBride is a douche who crashes the party, and Michael Cera has unspeakable things done to his bum while sipping on a juicebox in the bathroom. Then the Book of Revelations comes true, people get raptured and the actors are left behind to fight for survival.

Now back to the rape joke. Halfway through the film, Emma Watson shows up. At this point, only dudes are left alive. As she retires to Franco’s bedroom out of exhaustion, Baruchel tries to delicately broach a subject out of sensitivity with the fellas. He is concerned that Watson may feel threatened. The men look at each other, confused. McBride explains that Baruchel thinks that some of them may act “rapey.” This starts a series of accusations and denials, culminating in Watson overhearing their conversation. Her reaction? She comes out, smashes an axe into Rogen’s face, takes their shit and leaves.

Something of a miracle just happened: This is a rape joke where the finger is pointed at the rapists and rape culture in general in a scene in which a woman kicks their ass for it. And it’s hilarious.

This is a microcosm of the film itself. This is the End is a movie that reminds us vulgarity and stupidity are not conjoined twins. There are clever ways to be gleefully gross and provocative while remaining sensitive. This is the End is grotesque in a fundamentally inoffensive way, barely even poking fun at spirituality in a curse-laden movie about the rapture.

The discussion about whether rape jokes are “ever okay” has been raging online for about a year now, ever since Daniel Tosh crassly responded to a woman objecting at his stand-up by inviting her to actually get raped. The camps of “nothing is off-limits to comedy” declared war on “rape jokes are never funny.” The truth is anything can be funny, but there’s an asterisk on that comedic freedom leading to a footnote that reads “provided you’re smart and thoughtful.”

And that’s my attempt to say something of value about a movie with demons that have giant boners.