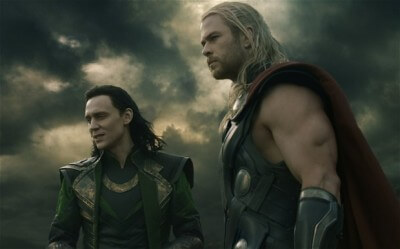 There is a second Thor movie.

Let that sink in for a second.

The comic book series is so niche and crazy that there’s actually a supporting character named Throg, who is a frog version of Thor. And that comic book has now spawned two big-budget movies…and they’re both pretty darn good. So, if you were looking to assess how latched we are to the teat of Marvel Studios entertainment, remember Throg.

Sadly, Thor: The Dark World is 100% Throg free. This isn’t to say it isn’t filled with gleefully absurd oddities, including “dark elves,” magic spells and a climax that is whacko bonkers. Picking up shortly after the events of The Avengers, Thor (Chris Hemsworth) has transported his adopted brother and general prick Loki (Tom Hiddleston) to space jail. The Norse Fabio then immediately sets out quashing problems on a whole bunch of planets using his magic hammer. But little does he know, an ancient evil is returning.

Back on earth, Jane Foster (Natalie Portman) and her significantly-less-irritating-this-time-out friend Darcy (Kat Dennings) stumble upon a dark energy that infects Jane. When Heimdall (Idris Elba) notices this, he tells Thor, and goldilocks immediately retrieves his semi-girlfriend from earth, bringing her to Asgard to meet his mom, Frigga (Renee Russo), and dad, Odin (Anthony Hopkins). Meanwhile, the evil elf Malekith (Christopher Eccleston) is busy trying to pull that bad juju from Jane so he can use it to destroy everything. Because that’s what comic book supervillains do. They don’t have sophisticated and nuanced motivation: they want to destroy everything that ever existed…because…evil?

Director Alan Taylor (“Game of Thrones”) ditches the wacky Dutch angles from the first Thor in favor of standard, epic-flavored fare. And it works, as the action is actually decipherable, even when people are falling in and out of invisible teleportation wormholes, which can be tricky. The fact that five different writers worked on the flick is an indication that the story feels a little stitched together. The tone abruptly changes from whimsical and light to dour and Shakespearean and then to slapstick comedy in which you see Stellan Skarsgård in his tightie whities. But in a way, this mess works to the film’s advantage, as it doesn’t follow any preordained superhero movie formula.

Comparing it to the first film, Thor: The Dark World offers two major improvements. The first is that the Jane/Thor relationship isn’t contrived hokum. The second is that the film actually gives its female characters things to do besides squeal and get kidnapped. Hell, it passes the Bechdel test, which may be a Marvel movie first. Whether it’s Sif (Jaimie Alexander) kicking warrior booty, Jane and Darcy barking orders to Thor and his posse or Frigga fighting like a friggin’ badass, there’s no “gentle gender” treatment here. Overall, the script may be sloppy and the tone may fluctuate but darn if Thor: The Dark World ain’t the fantasy/sci-fi, slapstick, action-packed, bizarre romp you never knew you kinda wanted.