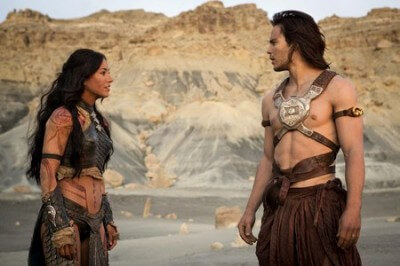 Although influential in its day, the cupboards of Edgar Rice Burroughs’ “John Carter” have been thoroughly raided and plundered. Not even a lowly can of unwanted beans remains, as everything from Star Wars to Dune has feasted upon the contents of one of the first deliciously pulpy sci-fi icons. Much has been made of the damn near century long struggle to bring Carter to the big screen; sadly, he has arrived not with a bang, but with a whimper…a poorly delivered, badly bearded whimper.

The unnecessarily convoluted story goes something like this: Carter (Taylor Kitsch) is Burroughs’ fictional uncle. After serving in the Civil War, he decides he doesn’t cotton much to fightin’ and becomes a surly, floppy-haired treasure hunter. One day, he stumbles on a gold-filled cave and rudely murders an alien who happens to be there. In a flash, Carter finds himself accidentally transported to Barsoom, which is alien-speak for Mars.

Playfully disregarding the laws of physics and scientific evidence, Mars turns out to have breathable air and tons of life. There are the Tharks, which look like giant talking green beans with extra appendages. There are also two groups of human-looking creatures whose only alien accessories are elaborate red henna tattoos. The evil guys, who wear red to help us know they’re bad, are from Zodanga, and the good guys, who wear blue so we know who to cheer for, are from Helium. They’re engaged in a war that threatens to destroy the planet…somehow. The steps to planetary extinction are less clear than Kitsch’s come-and-go accent.

After he’s given magic milk that permits him to understand interplanetary languages, yet another indication of Burroughs’ middle finger towards reality, Carter meets Dejah Thoris (Lynn Collins), who is as homina-homina gorgeous as she is ass-kickingly powerful. Obviously, Carter wants to Dejah her Thoris, so he reluctantly becomes the centerpiece in a huge conflict that involves intergalactic angel thingies and subplots involving Thark torture. Again, pretty overly complicated for your basic “good guys fighting bad guys in space” movie.

Although clearly trying to adhere to the source material, the decision by writer/director Andrew Stanton and writers Mark Andrews and (shockingly) Michael Chabon to include not just a prelude and epilogue but a prelude to the prelude and an epilogue to the epilogue only furthers the confusion. But that’s not the worst part. The worst part stands over six feet tall and played Tim Riggins on “Friday Night Lights.”

Kitsch isn’t inherently a terrible actor, although you wouldn’t know it if John Carter is your introduction to the former Abercrombie and Fitch model. He is, however, wholly without inherent charm and charisma. Sure, ladies swoon for his features and physique, and he was able to manipulate his masculinity brilliantly on the aforementioned TV show that brought him to fame. But here, he’s leaden. Carter needed to be iconic and compelling; think Harrison Ford before he stopped caring or Michael Fassbender now. Instead, Kitsch just blurbs and blabs, turning what could have been one of those characters kids pretend to be into a forgettable figure known only for his bizarre metal boob armor.

To be fair, if Kitch was replaced with a dynamic performer, the movie may have been fairly fun. Collins is great, the visuals are pretty enough and the secondary performers (Mark Strong, Willem Dafoe’s voice) are dang nice. But we don’t have a good time so much as we endure wooden delivery and expected consequences.

One other quick note: Unlike Avatar, where the noble savage storyline was hammered into skulls with a dull chisel, John Carter doesn’t make the inhabitants of Barsoom into a conspicuous native analogy, nor does it reduce Thoris to curvtastic eye candy. She’s got personality that extends beyond the traditional “gal with spunk and fire,” even if she seems incapable of calling John Carter by just his first or last name.

John Carter has nothing new to offer, which isn’t exactly the fault of a nearly 100-year-old property that everybody else borrowed from. What it could have been, what it should have been, is pop culture candy. Unfortunately, while the fictional Mars has oxygen, this movie struggles to barely breathe.