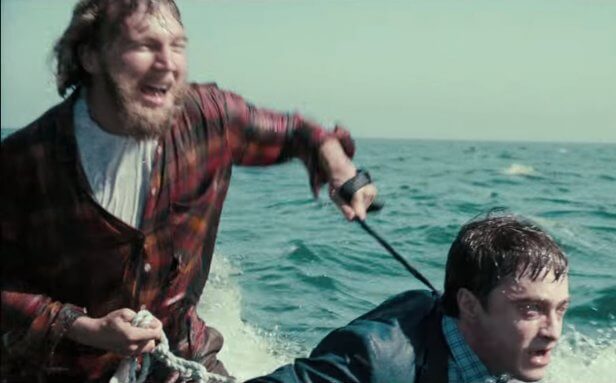 Within the first 10 minutes of Swiss Army Man, Paul Dano rides Daniel Radcliffe like a jet ski, propelled by the power of Radcliffe’s farts. There’s zero chance that this scenario hasn’t already been thoroughly explored in “Harry Potter” fan fiction, but it’s a first for the big screen. Say what you will about a movie in which a corpse’s erection serves as a guiding compass, but you can’t call it unoriginal. Written and directed by Daniel Kwan and Daniel Scheinert, who are presented in the credits as the singular entity “Daniels,” Swiss Army Man is an incredibly easy movie to watch and a shockingly difficult film to discuss.

Not to suggest Daniels’ film is “style over substance,” but the plot is gossamer nonsense. Hank (Dano) is stranded on an island about to hang himself when a corpse (Radcliffe) washes up on the shore. After briefly investigating, Hank goes back to his suicide attempt, only to be distracted when the corpse, who he later calls Manny, begins farting up a storm. This leads to the aforementioned “flatulence-powered Sea-Doo” scene, which is where audiences will decide to strap in or abandon ship.

Eventually, Manny begins to speak. He is a blank slate, memory-less and unaware of what it means to be alive. Hank begins the process of telling him what constitutes a human life, and in doing so, exposes the tragedy and sorrow of the human experience. In some ways, Swiss Army Man is a celebration of the human body and spirit; in others, it’s a depressing condemnation of the isolation felt by those doomed to remain uncoupled in a society that demands we be counted off in pairs like we were boarding Noah’s ark.

Swiss Army Man is whimsical but laden with enough sorrow to anchor the experience in something other than goofy magical realism. When Manny believes himself to be in love with a woman he saw on Hank’s phone, Hank attempts to motivate him by pretending to be that woman. The elaborate constructions he creates during this sequence are lyrical and gorgeous, speaking to a primitive need within all of us to be wanted and loved. Of course, these scenes culminate in a fire-fart fueled battle against a bear, so deeper philosophical meanings may just be projecting…

But that’s the beauty and, sometimes, the frustration inherent in Swiss Army Man. It feels important, but it also features an emotional climax that hinges upon “owning” one’s farts. Dano and Radcliffe are both spectacular, with the former managing to give a “sad sack,” one-note character amazing depth and the latter giving an emotionally vibrant performance as a dead guy. At times, the surrealism seems to be a commentary on the absurdity of our daily lives. At others, reading more into what’s going on feels like trying to write a thesis paper about a penis-enhancing pill commercial. Ultimately, somewhere between the profound and profane, Daniels has made what is inarguably one of the most original films of the year, an accomplishment unto itself.