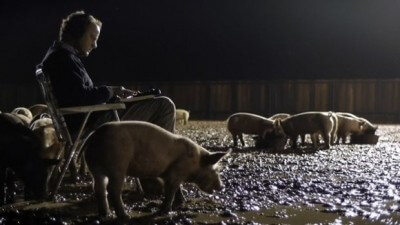 This is the worst because it’s the best. Let me explain…The only thing worse than years virtually free of good movies are years when I could make a top 10 list from the films I cut from my final top 10 list. What I’m sayin’ is: 2013 was real, real good, y’all.

For the love! American Hustle, Saving Mr. Banks, Inside Llewyn Davis, The Secret Life of Walter Mitty, Her, The Wolf of Wall Street, and August: Osage County didn’t even screen yet, and my list was still 10 pounds of awesome in a five-pound bag. Check out Movieha.libysn.com in January for my final list, likely to include some of those unreleased films. For now, let’s slap ordered numbers on magnificent works of artistic expression!

When people say “it must be nice to get paid to watch movies,” I remind them I had to watch the following movies and then show them my paycheck and ask if it’s worth it. The 5 movies that made me rethink my life choices this year:

5.) White House Down – I know, it seems impossible, but the Channing Tatum/Jamie Foxx movie directed by the guy who did 2013 was really stupid.

4.) The Incredible Burt Wonderstone – This is why you can’t be famous any more, Jim Carrey. Unfunny, insulting and a complete waste of Olivia Wilde. Unforgivable.

3.) The Hangover Part III – When I saw this vile, insipid excuse for entertainment, I was certain it was the worst film I’d see this year. This franchise is like comedy herpes.

2.) The Lone Ranger – This film is not on this list just because it’s stupid. It’s on this list because it contains the most offensive Native American material not worn by Robert Griffith III.

In any other year, the following would have been in my final list: Side Effects was a brilliant and twisty potboiler; To the Wonder was a beautiful love poem; Iron Man 3 was fun and fresh; The We and the I was raw and real; Man of Steel finally made Superman interesting; The East was a thriller with a conscience (and Brit Marling, which always helps); Fill the Void was an intimate Hasidic moral morass; A Hijacking made Captain Phillips look like amateur hour; Gravity was weighty weightlessness; Frozen is a modern Disney classic and Only God Forgives was weird and awesome.

Sorry to all of these awesome films. This doesn’t mean I don’t love you.

10.) Before Midnight – When Before Sunrise hit in 1995, nobody could have guessed that 18 years later, the final installment in this most unlikely trilogy would rank among the most thoughtful and entertaining contemplations on love. Too many feels…

9.) The Hunger Games: Catching Fire – Wowza! With an overt metaphor and a supposed target demographic of “tween girls,” there was no reason to expect the kind of emotionally resonant and thrilling material this sequel delivers. This was wonderfully acted, socially aware box office dynamite led by a vital female lead. More please.

8.) The World’s End – If you haven’t enjoyed Simon Pegg and Nick Frost’s three films with director Edgar Wright, we can’t be friends. Their final effort is somehow sincere and satirical, clever and compelling, brilliant and bad-ass. It even manages to make a wonderful statement on the immobilizing nature of nostalgia. I’ll drink to that.

7.) Blancanieves – Go back in time and tell me that a silent, black-and-white version of “Snow White” set in the 1920s in Seville, Spain with a backdrop of bullfighting would make my top 10 and see how I react…because I’m curious. Unlike The Artist, a cloying silent film about silent films, Blancanieves is proof that a gifted artist can still simply use this genre to absolute perfection.

6.) The Act of Killing – Of all the moments I’ll remember from this year in film, the sound of confessed genocidal murderer Anwar Congo retching as he realizes his crimes is right there at the top. This documentary is unlike anything I’ve ever seen, in that it uses art and cinema to obtain a confession that few have ever made. Unreal.

5.) Ain’t Them Bodies Saints – “This happened in Texas.” So begins a modern outlaw romantic tragedy unlike anything else on screen this year. Casey Affleck and Rooney Mara are soul-bound lovers whose union can only result in death and destruction all around them. Epic, lyrical and positively spellbinding.

4.) Fruitvale Station – Empathy. That’s what director Ryan Coogler’s dramatization of the real-life tragedy that befell Oscar Grant is all about. With one of the year’s best performances from Michael B. Jordan, the movie gives context to a country that still has an open wound caused by the Trayvon Martin incident. This is must-see material.

3.) 12 Years a Slave – Speaking of “must see…” This hurts. It bites and stings, plays like a horror movie, captivates with perfect performances stacked on top of one another and serves as a dramatic window to a past we like to shut the curtains on. You have to see this at least once. It should be some kind of law.

2.) Spring Breakers – Simultaneously a skewering of the debauched misogyny that permeates young culture and a creepy character study of what it means to “be bad,” Spring Breakers is one of the most visually potent, dynamic films in recent memory. It also helps that it features a performance from James Franco that is bar-none the year’s best.

1.)    Upstream Color – Oh, Shane Carruth, how you torture me. Ages after his Primer became one of my favorite sci-fi films, his sophomore effort comes out and rocks me to my core. It’s a thoughtful exploration of the disintegration of personal identity in relationships, a mysterious thriller and a spiritual contemplation of human connectivity. And it’s all about pigs.