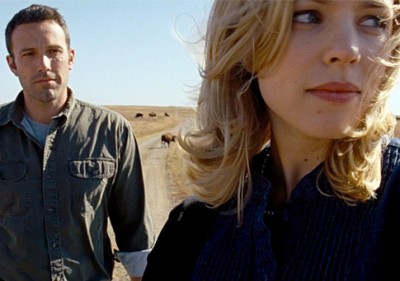 Maybe it’s that Malick strives to find beauty, even with the darkest of prompts: war (The Thin Red Line), the death of a child (Tree of Life), generic and ubiquitous heartbreak (To the Wonder). Compare him to a contemporary like Lars von Trier who is too busy mutilating Willem DaFoe’s genitals or making Bjork cry. Still, what makes no sense is that if you simply described to me the movies that Malick writes and directs, especially his last two, I’d beg you for a mercy kill as opposed to sitting in a theater for those hours. On paper, his work is navel-gazing shot through a lens of hubris with a camera made entirely of pretension.

So why doesn’t it feel that way when I watch it?

In To the Wonder, Ben Affleck’s Neil falls in and out of love with Olga Kurylenko’s Marina and briefly adores Rachel McAdams’ Jane while Javier Bardem’s Father Quintana waxes theologic. That’s it. It’s a like a Goddard rom com or the kind of poem a talented, heartbroken teenager writes. And it should suck. I mean, Kurylenko’s softly spoken French voiceover means the images of lovers laughing and kissing in odd angles can’t comprise a Levi’s commercial…but maybe a foreign perfume ad. And yet it works. How? Why?

Here’s what I got: Malick speaks in coded emotional language. Affleck is frequently pushed to the corner of the frame, inviting us to treat what unfolds as “point of view.” And it’s our point of view. We know these moments: the rush of soul-swallowing, untamed love. When Marina speaks in plain platitudes like “If you had asked me to stay, I would have,” it is an echo of what once passed through the lips of an ex. When Jane whispers “I trust you,” we know the emotional surrender contained in those words. We don’t need to hear Marina and Neil’s verbal slugfest because we fill in the words of the scene with arguments we’ve lived through.

And yet, nothing about To the Wonder indicts love. It’s not von Trier mocking us for caring or finger pointing at futility. As he did (better) in Tree of Life, Malick encourages us to live, no matter what, to do as Lord Byron wrote and “Walk in beauty.” I’d be lying if I said the film isn’t occasionally laborious. As good-looking as Kurylenko and McAdams are, fuzzy shots of them frolicking can (and do) eventually become trying. But this is poetry; sometimes it takes a few verses to get things right.