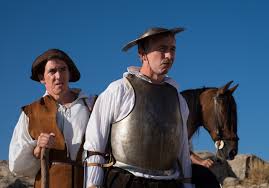 Look, by now you either mildly enjoy watching Steve Coogan and Rob Brydon eat food you can’t afford in places you’ll never visit while making conversation you don’t mind or you hate everything about it. Theoretically, someone somewhere loves the shit out of these navel-gazing, self-referential expeditions or there wouldn’t be an inexplicable third installment of the Trip series. That said, much like Yetii, Bigfeet and truly informed undecided voters two days before a presidential election, no one has ever actually met a wildly enthusiastic fan of these films in real life. If someone goes bananas for The Trip to Spain, please extensively document that person to verify their legitimate existence.

The bulk of humanity will find Coogan and Brydon’s latest precisely on par with their previous. What makes this installment distinctly different from The Trip or The Trip to Italy is that, this time out, the duo cavort and snort their way through middling-to-pretty-good celebrity impressions in Spain. That’s it. That’s the difference. Otherwise, it’s still Coogan vacillating between rampant narcissism and blatant insecurity while Brydon tiptoes the line between goofily affable and downright smarmy.

The light-as-a-feather-stiff-as-being-bored narrative involves Coogan being ditched by his agent, expressing his love for a former flame and discovering a surprise involving his son. Brydon is left implying something about marital fatigue vs loving long-term commitment and seemingly fighting off an urge to turn to the camera and ask the audience if they liked it because, if not, he could try again.

Director Michael Winterbottom does blatantly hammer home a somewhat satisfying, if horrifyingly obvious, motif through repeated incantations of Don Quixote. From mentions of windmills in songs to actually having Coogan and Brydon dress as Quixote and Sancho Panza, the metaphor of self-aggrandizing idealism isn’t so much implied as Gilbert Gottfried-ed through a megaphone. What’s satisfying, though, is that there’s a bit of savageness to it all.

Most films with aging white men as the near-entirety of the cast seek to validate the inherent “specialness” of the leads or the false presumed universality of their privileged experiences. The Trip to Spain confirms that Coogan is a pretentious joke, shows that Brydon is little better and concludes with a sequence that very nearly made the whole experience into a darkly comic gem, had it gone a bit further down an unexpected gravel road. The Trip to Spain, at the very least, deserves credit for exposing men like these as frauds and not endearingly redeemable middle-aged heroes.

Given that the pair do some of the very same impressions as they did the last time out, and even repeat several entire routines during this film, this has to be the end of the Trip movies. It simply has to be. Right? The footprint the trilogy leaves will be as a modestly pleasant travelogue filled with mildly meaningful observations and minutely funny dialogue. In other words, The Trip to Spain completes a franchise that is exactly as significant and meaningful to the world as watching two wealthy white dudes talk and eat.