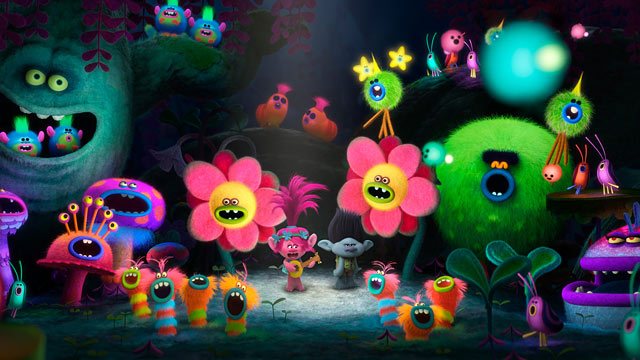 Trolls wins a minor invisible award as the second best animated movie ever based on popular children’s toys that should be a soulless cash grab but somehow approaches the heights of top-shelf Dreamworks. That’s something, if not a lot. Thanks to the big winner of that prize, 2014’s The Lego Movie, we can’t just ignore movies like Trolls right off the bat. Because of The Lego Movie, we now know that terrible ideas can sometimes make really good movies, and we have to give terrible ideas like Trolls the benefit of the doubt. Although I expected to pay the toll with Trolls, I had a pretty fun time with these furry, up-combed dolls.

Before I go any further, I should probably address those debating whether to take their families to see Trolls in 3D: Please don’t. We’re in our seventh year of the 3D trend, and virtually all animated films are released in the format these days. Don’t encourage it. Buying 3D tickets to Trolls will just make a false promise to your kids that they’ll be able to reach toward the screen and touch cute trolls. I know because I sat in the theater for 92-minutes, watching images that were clearly meant to “jump out” at me, and not once did the 3D add any depth to the animation. Don’t pay extra money to put recycled plastic on your kids’ faces.

With that out of the way, you’re probably wondering what this movie based on inanimate collectables is actually about. It’s mostly about stuff you’ve seen before, but done much better than usual. Twenty years ago, trolls escaped the wicked Bergens, giant creatures that were perpetually unhappy unless they could feast on the trolls’ enchanted flesh. When a Bergen seeking redemption captures the trolls, it’s up to princess troll (Anna Kendrick) and grumpy troll (Justin Timberlake) to rescue the cuddly kingdom. If it sounds like dreck, don’t worry. Trolls packs a seriously subversive edge.

For an animated kid’s movie, especially one based on dolls, Trolls is weird. Like…really, really weird. It’s manic, psychedelic, and unapologetically unusual. The weirdness has much less impact when Trolls stumbles through weak musical numbers that belong in another movie, but the energy never fades away completely. It’s easy to imagine a lot of adults getting a kick out of Trolls because it’s so bizarre, albeit clever. For maybe the first time ever, I’m genuinely surprised that a studio made an animated kids movie as delightfully strange as Trolls.

This is the type of movie I would have loved when I was a kid, and I really enjoyed it as an adult. Will I ever watch another installment in the inevitable Trolls franchise? No, probably not. I’m not against franchises or sequels outright, but part of the reason Trolls works so well is because you’re surprised it works at all. In a sequel, the surprise is lost. Don’t dread taking your kids to see Trolls. It’s better than most of the movies your kids drag you to.