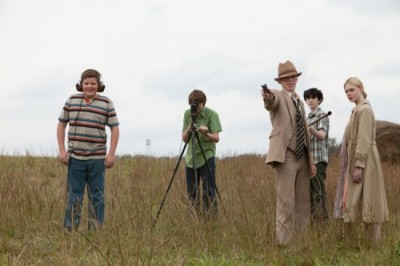 Although set in 1979 in small-town Ohio, Super 8 feels like it takes place whenever and wherever you were when you stumbled into your first life-defining moment during the terrifying tipping point that is adolescence. Joe Lamb (Joel Courtney) has lost his mother and is left with his cold-but-caring father (Kyle Chandler), a sheriff’s deputy whose scrunched face is always set to “unamused.” Although his dad wants to “hot potato” him off to summer baseball camp, Joe refuses to abandon the zombie movie that he’s working on with his pals, Cary (Ryan Lee), Preston (Zach Mills), Charles (Riley Griffiths) and Martin (Gabriel Basso).

When Charles adds Alice (Elle Fanning) to the cast, Joe is overcome by an inner hormonal tsunami; he loves her in that stupidly honest way that comes before one knows what love is supposed to be. And just as sparks start to fly, a train crashes behind the gang as they’re filming…and a terrifying monster from another planet is freed and begins wreaking unspeakable havoc. You know, just like when you were a kid.

Super 8 is a delightful creature feature mashed-up with a coming-of-age story, a seemingly incomprehensible fusing of two disparate ideas that works. Big time. Filled with pitch-perfect PG-13 scares, the film sticks a sharp straw in the Capri Sun of popcorn thrillers from days long ago and sucks up every last drop. This is no more a derivative exploitation than the many homages of Tarantino. While cynics may see Abrams attempting to leverage Steven Spielberg’s body of work for personal gain, Super 8 feels far too honest, far too joyous for such accusations. And Spielberg’s producing credit here suggests that he agrees.

Although the joint where Abrams welded the two story arcs is admittedly creaky, it’s hard to care. The cast, most notably Fanning, is too effortlessly real, the thrills are too delightfully giddy and the overall experience is too instantly classic to get bogged down in structural minutia. Super 8 is one of those movies whose critics you pity. It is nostalgia of the most noble order and just may be this summer’s best film.