Home » Film » Sex Will Kill You 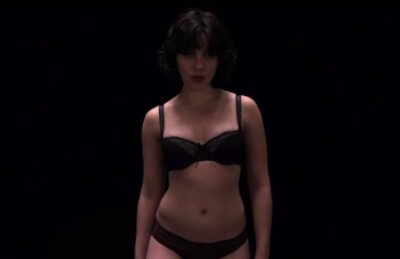 Director Jonathan Glazer and writer Walter Campbell’s Under the Skin joins the smallest movie subgenre: brilliant but batshit insane. Inarguably gorgeous and insatiably intriguing, if I were forced at gunpoint to explain the “point” of this one, I’d end up with a new orifice.

Guesses as to the major thesis: Sex is bad? Women are the gatekeepers of sex and lure men into destruction with their alluring “honey traps?” Men are nothing but vile, destructive perv-balls hellbent on perpetuating rape culture? Motorcycles are cool?

Unless someone told you going in, you wouldn’t have any idea for most of the film that Scarlett Johannson plays a nameless alien. The abstract but arresting opening sequence could be demonstrating almost anything but appears, in hindsight, to be the birth of a space baby. What is certain is that this alien’s job on earth has to do with making deadly sexytime. Specifically, she cruises around Scotland in a big van, picking up isolated dudes more than happy to be picked up by Scarlett Johannson. Then she kills them. Kind of…

Basically, in a completely black, endless room, she walks backwards in various states of undress while naked fellas with “downstairs parts” at “full attention” walk towards her before they disappear into a pool of black goo. This repeats until Lady McMurder-Alien meets a disfigured man who shows her true affection. This stirs something in her, leading her into the arms of a kind, slightly older lover who she does not black-goo murder. Unfortunately, she’s then sexually assaulted by a man in a forest who is dressed like a firefighter. Fin.

Here’s the thing: Under the Skin is good, maybe even great. I know it is. I just don’t know why. Certainly, it has something to do with the visual opulence and relentless tension, the latter aided in no small part by Mica Levi’s jarring score. In a sci-fi film with few sci-fi moments, it is Levi’s music that most strongly creates alien atmosphere. Johannson does most of her work with physicality, not just “come hither” looks and alluring jiggles but with smirks and burdened glances. The final shots are downright unforgettable, all but demanding the audience keep working through what they just saw.

And I am. I’m working quite hard, actually. At times it feels like the film can be seen as a commentary on the base nature of human desire, the depravity of lust. But that doesn’t quite feel right. Something about turning the alien from a conniving serial sex killer to a broken target of male domination to be pitied suggests…something else. Unlike recent abstract pieces like Upstream Color, Holy Motors, Beyond the Black Rainbow or Enter the Void, there’s no singular feeling to hold on to, no lasting identifiable aura. But it’s good; I know it is!