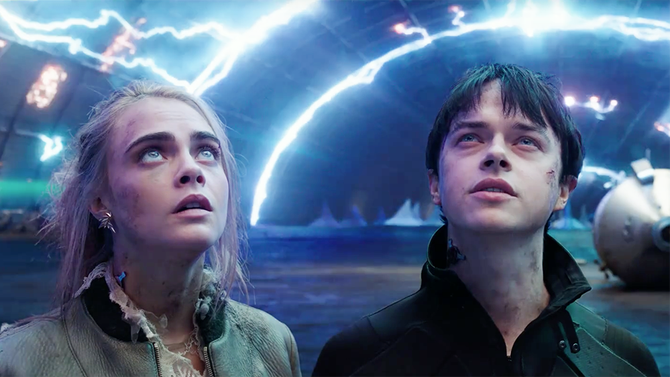 Valerian and the City of a Thousand Planets has the exact problems you would anticipate an adaptation of a 50-year-old French sci-fi comic book directed by a 58-year-old white dude would have. Sexist in a way that it (wrongly) thinks is cheeky-sexy-fun and devoid of any meaningful diversity, the film is seemingly set both in the 28th century and a time before women and people of color could own property. Combined with a lead actor possessed of anti-charisma and a lead actress who seems bored, you think this would mean the film is total merde. And it would be, were it not for the fact that it’s goddamn gorgeous and frenetically fun. Dammit, France.

Because writer/director Luc Besson is infinitely more obsessed with bringing bonkers sci-fi spectacle to life than remembering black people exist or that women can think, Valerian doesn’t have a plot so much as a “plot.” Major Valerian (Dane DeHaan) and his partner, Sergeant Laureline (Cara Delevingne), are intergalactic space agents sent to retrieve a creature that’s the last of its kind. In doing so, they stumble across a conspiracy that involves the destruction of a planet full of skinny nekked white folks, the treachery of a corrupt commander (Clive Owen) and the exploitation of Rihanna by a batshit Ethan Hawke. And when Ethan Hawke gives the best performance in your movie by a few dozen light years, you’ve got some real, real bad acting in your movie.

Valerian falls into the Sucker Punch pit: It is undeniably effin’ stunning, oftentimes relentlessly fun and just so blatantly awful to huge swaths of the human race. The minute you surrender to the nonsense exuberance of a tiny dragon that poops nuclear pearls, you are forced to watch Valerian “flirt” with Laureline by talking down to her about how many space-ladies he has space-boned. The second you relax to enjoy a funky chase sequence filled with trippy whackjob aliens, you must immediately suffer through a horrifyingly exploitive sequence where Rhianna, literally the only black woman with a substantive speaking role in the film, does a seductive sexydance for Valerian, reducing the footprint of people of color in this alt-future to “they sing, dance and help nice white people do their jobs.”

Besson is a gifted visual storyteller. Because the writing, especially the “Holy George Lucas” cringe-worthy dialogue, is so bad, bad, bad, when Valerian shuts up and focuses on non-humans or just the madcap action, it becomes the sort of pulp space-opera shenanigans that can be deeply satisfying. The quest to be “taken seriously” means that sci-fi often uses mind-bogglingly advanced special effect technology to depict things as “realistically” as possible, forgetting that part of the genre’s appeal is the inherent silliness. Valerian embraces the goofy but also embraces the grossest, regressive elements of its source material. As it stands, the City of a Thousand Planets is a $200-million towering testimony to mediocrity.