Home » Film » No Love for this Deuce 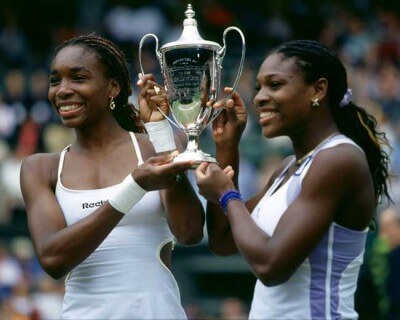 It’s about hunters and gatherers: A good documentarian hunts the truth, stalking prey at camera-point, ready to spear any accidental insight and overlooked perspective that is scared out of the bushes. Directors Maiken Baird and Michelle Major are mere gatherers, collecting whatever the legendary Williams sisters drop down to them and presenting it to the audience as if we should be thankful for a feast of rotten fruit.

Venus and Serena is not a documentary. Hell, it’s barely a movie. It’s a 100-minute infomercial selling two superstars who need no selling. It is a torturous feature where every misstep of the girls is apologized for and overexplained, sometimes by a former President of the United States. It is a yawn-inducing, fragmented attempt to further massage an image that didn’t seem to need massaging. Unless something has changed, the sisters are considered all-time greats, pioneers in the sport and potent cultural icons. So this press release masquerading as a feature film is inexplicable.

The thing is, there are questions about the Williams sisters that fans and non-fans remain curious about. Their father, Richard, is a shadowy and fascinating figure whose decision to train his daughters in a sport he had no passion for is curious at best. So of course he’s on screen for maybe 10 minutes. The girls’ mother, whose relationship with her ex-husband is also an enigma, never truly discusses the family life that shaped the athletes. To watch Venus and Serena is to watch something that has been so thoroughly vetted that only Sportscenter clips remain.

The directors even bork the seemingly unborkable, botching the staggeringly inspirational journey of two black children from Compton into the whitewashed country club elite. Where are the interviews with their friends and former neighbors? Are they proud to still claim the sisters or do they consider them sellouts? What is the relationship of the new millionaires to their former community? No outside perspective is included that does anything other than refer to the duo as glowing superhumans. When Serena compares herself to Martin Luther King Jr and Malcolm X at different points, it doesn’t even feel out of place, despite the staggering hyperbole.

Maybe that’s because one of the voices we hear is President Bill Clinton. In response to Serena’s infamous tirade against a line judge (wherein she suggested she may perform a rectal insertion of tennis equipment), he literally says we should take it easy on her. And we should, but not for any reason the film presents. Serena is revealed to have built compartmentalized personalities with their own names, one of which is “ghetto.” This fragmented identity is fascinating and sympathetic, but because it invites scrutiny and requires vulnerability, it is disregarded so Anna Wintour can talk about their outfits.

Ending with song in which Wyclef Jean rhymes “Serena” with her desire to be “in the arena,” Venus and Serena is a docu-disaster if ever there was one. So if you’re hankering for a quality sports documentary, Google “ESPN 30 for 30” and enjoy.