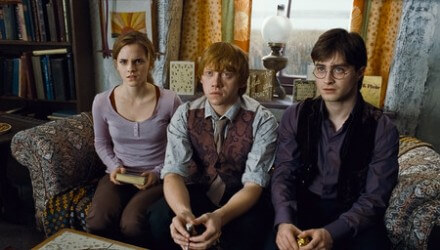 I narrowly dodged that Hogwart’s-bound train. By the time JK Rowling’s bespectacled wand slinger rose to prominence stateside in 1999, I was of legal age to get Harry Pott-ed and would only have considered following the literary series if name-dropping Dumbledore magically manifested female phone numbers.

And yet, with a childhood peppered by a Star Wars obsession and a current downstairs closet choked with oodles of “Spider-man” comics, I can safely say that I “get it.” I get the costumed audience members; I get the giddy screaming/laughing/moaning at the on-screen appearance of celebrated minor characters; I get the rabid excitement of a fan base who passed through adolescence and into adulthood via that aforementioned train. I’m just not really part of it.

Warner Bros is right in that the culmination of a decade-long movie-screen onslaught—the seventh and final, two-part film, Harry Potter and the Deathly Hallows —is the “movie event of a generation.” But the cinematic series has always operated on the assumption that every last viewer can quote chapter and verse from the novels, able to sort on-screen subplots and supporting cast members through near-photographic recall of Rowling’s staggeringly enormous tomes. For the mild enthusiast, say someone neither young enough to have read the books during formative years nor old enough to have shared them with a child, Deathly Hallows Part 1 is easily the worst installment so far.

Breathe Potter-ites, I still liked it. It just isn’t the thoroughly well-composed, character-based experience of its predecessor, The Half-Blood Prince . That film managed to delicately offset a lack of real forward momentum, the perpetual Achilles heel of the cinematic series, with surprisingly sensational acting and emotional revelations. Deathly Hallows is all moping and stationary running, all delicate place-setting for the final half of the final film in which, presumably, something finally happens.

As if Solomon ran a studio, Deathly Hallows was split in twain because “there was just too much to cover” in one go-round. Except, I’m pretty sure I can cover everything that happens in one sentence: Harry (Daniel Radcliffe), Hermione (Emma Watson) and Ron (Rupert Grint) run from people chasing them then pause long enough to flirt and fight. Wash, rinse, repeat.

Okay, technically, more happens. As always, the film opens with nary a brief flashback to important previous events, so get to shuffling through the mental rolodex you’ve set aside for seven movies worth of characters and events. Dumbledore is dead—sorry, but if you’re reading this you either already know that or don’t care, and besides, that happened last movie, remember? But with the help of Hagrid (Robbie Coltrane) and a host of others, Harry and his friends escape from the still-noseless Voldemort (Ralph Fiennes) and his evil wizard posse, although casualties and wounds are suffered. Then the good guys hold a wedding for two characters I would swear have never appeared in any of the film versions before.

When the ill-timed wedding is attacked as should have been expected, Harry, Hermione and Ron escape and resume hunting down horcruxes, which are trinkets that, when destroyed, permit the killing of Voldemort. Rowling went with horcrux presumably because Macguffin was already taken. The rest of the movie has the characters show up somewhere looking for something, only to be discovered and be forced to run back to almost exactly where they started. Oh, and in between there’s a CGI-animated sequence in which Hermione and Harry make out…nekkid. Don’t worry, there’s tasteful smoke wisps covering the naughtiest bits, but the evolution to more adult material is officially complete.

Thrice-returning director David Yates fizzles exactly where he succeeded the last time out. Half-Blood Prince was a bubbling cauldron of minor moments, as the director coaxed Radcliffe and Watson in particular to impressive quiet character beats. This time out, it’s not quiet moments so much as tone-deaf moping, as there are no less than three scenes of pure, dialogue-free pouting. Either screenwriter Steve Kloves chose to trim important subplots or Deathly Hallows was split into two parts not because of story concerns but, gasp, because of financial reasons!

Thankfully, aside from the wonky opening motorcycle chase, the visuals remain breathtaking and spectacular. In fact, the animated sequence that accompanies Hermione’s reading of the origins of “The Deathly Hallows” was so wicked-sweet, I would have blissfully watched an entire film in that style.

What Deathly Hallows Part 1 confirms is that it’s time. It’s time for minor and major Potter-lovers to let go; time for the epic-concluding battles we’ve been tantalized with since the turn of the new millennium. Although this may be the most unnecessary, easily trimmable installment yet, it has hopefully cleared the brush for the emergence of a spectacle sure to delight fans across the enthusiasm spectrum. Bring me the head of Voldemort! I’m ready.