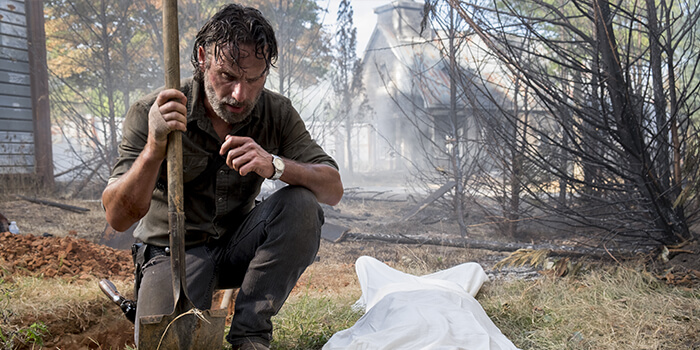 Okay, hang with me for a minute…

A line of dialogue in Season 1 has become the central thesis of AMC’s uber-hit series The Walking Dead. In that year’s finale, Sherriff Rick Grimes (Andrew Lincoln) led his desperate group of survivors to the last Centers for Disease Control and Prevention (CDC) lab still standing after the zombie apocalypse. Grimes discovered that its lone occupant was a suicidal scientist determined to blow up the building with everyone inside. After the scientist relented, Rick said he was “thankful.” The scientist responded, “A day will come when you won’t be.”

The Season 7 premiere aired in late-2016, and it’s the most punishing hour of television that I’ve ever seen. The plot is simple: two characters are beaten to death with a baseball bat while Grimes is emotionally tortured until he’s almost coaxed into chopping his sons hand off. He doesn’t actually do it, but still…

That’s it. That’s the whole episode. An entire hour of just that.

I’m a little late to the party writing about the Season 7 premiere, appropriately titled “A Day Will Come When You Won’t Be,” especially since dozens of articles critiqued it way back in 2016. I only bring it up because the episode encapsulates every reason why I just recently decided to stop watching The Walking Dead for good.

I freely admit that there’s an overabundance of articles written by former fans explaining why they’re done with The Walking Dead. I just haven’t read one written by someone like me. After eight years, I think my relationship with the series is a bit weirder than the average fan’s.

I still love The Walking Dead.

It will always hold a special place in my heart. However, I’m very aware that it’s the most poorly written, frustrating show on television. I stopped watching The Walking Dead three or four times before, and I always came crawling back to catch up on Netflix. My favorite characters on the series don’t actually do much, yet I’m somehow still convinced deep down that they’ll get a standout moment someday. I also hate that there’s a zombie-fighting tiger on the show, but that tiger is responsible for my favorite scene.

It’s bizarre because no series is capable of achieving as high of highs and as low of lows as The Walking Dead. Especially not in the exact same moment. Look no further than that Season 7 premiere. It’s one of the best episodes of The Walking Dead and also, in many ways, is a total shitshow. It answers the Season 6 finale cliffhanger about who gets murdered with a bat wrapped in barbed wire in what are simultaneously the most surprising ways possible and the most awkward.

First character to get his dome clobbered is Abraham (Michael Cudlitz). The Walking Dead’s whole shtick is that any character can die at any moment. Long ago, the writers realized that’s hard to keep going unless you start offing key cast members. Sometime around Season 4, the series started to introduce charismatic supporting characters for the sole purpose of killing them off relatively quickly. Abraham was one such character.

From the moment I first met Abraham, I was just waiting for him to die.

Despite the quip-spitting, mustachioed ‘Merican being one of the series’ more vibrant characters, it was impossible to connect with the dude when he already seemed to have one foot in the coffin. When his death was essentially a fake-out to set-up another characters’ even more brutal beating, it felt like confirmation that Abraham was, indeed, just a filler character. We spent seasons with guy just so the show could set-up a fake-out.

Ultimately, Abraham’s overall arc was a low-low of the series. Of course, the high-high part is that Abraham’s actual death was pretty epic. Abraham told his killer to, “Suck my nuts.” They were such beautiful last words that I actually dug the guy for the first time ever. Hell, I hope those are my last words… I still quote them. As for the character’s arc leading up to a big fake-out? Well, I can’t deny that the fake-out actually worked, even if it essentially cheapened the character.

The next person to take the bat was Glenn (Steven Yeun). Part of Abraham’s fake-out death was that it wasn’t particularly gory for a show that prides itself on blood and guts. Glenn’s unexpected death was infinitely worse. The bat caved in his forehead, his eyeball popped out, and he was somehow “alive”—more like a twitching meat sack—long enough to barely sputter out a loving message to his pregnant wife. For a horror series, it was the most horrifying moment yet. Mission accomplished, The Walking Dead. You profoundly disturbed me.

Still, the death was somewhat diffused by the fact that Glenn supposedly “died” in a really obnoxious fake-out less than a season earlier, simply to return a few episodes later. Glenn’s actual death was satisfyingly gruesome, but if a show can fake a character’s death for several episodes in the first place, then the show doesn’t need that character anymore. Sure enough, Glenn eventually returned from his fake-out death without The Walking Dead even noticing. He didn’t grow in any way because of the experience. He twiddled his thumbs for a few more episodes, and then the show killed him for real. Why, though? It’s so weird to “kill” a character off just to have them return and almost immediately get killed again.

A few days after Glenn’s first fake-out “death,” another The Walking Dead fan asked if I really believed he was gone. I said I bought it. Except, what I really meant was, “If The Walking Dead is as good of a show as I hope it is, then Glenn is dead.” But nope. Due to some tomfoolery and inexplicable pacing, one of the best scenes of the series was undermined because of its immediate connection to one of the worst.

And it’s only getting weirder. The first half of the current season answered fan requests to be action packed, yet the first four episodes were nonstop shootouts that somehow managed to be boring. The series has always been frustrating. For the first time ever, it’s too frustrating. Even if The Walking Dead wants to, it just cannot stop itself from weighing down its highpoints with depressions. For whatever reason, the showrunners and writers have decided that The Walking Dead is A-OK being a mixed-bag.

So, I’m done. No, I won’t catch up with the show on Netflix in a few months. I’m done for real this time. I can’t do it anymore. It’s stress that I don’t need in my life. Last Sunday, the show killed off a major character. Obviously, since The Walking Dead is The Walking Dead, it was another frustrating moment. Although the character was beloved, the bad actor playing him bogged down the drama. It’s simultaneously a bummer and relief to see him go. Isn’t that just so strange? Why is there a show like this?

These days, I feel like the suicidal scientist from Season 1 was speaking directly to me. I will always appreciate the time I spent with The Walking Dead, but the time has finally come when I’m just too exhausted. There are plenty of shows that don’t pull me back and forth like two zombies playing tug-of-war with what’s left of my corpse.