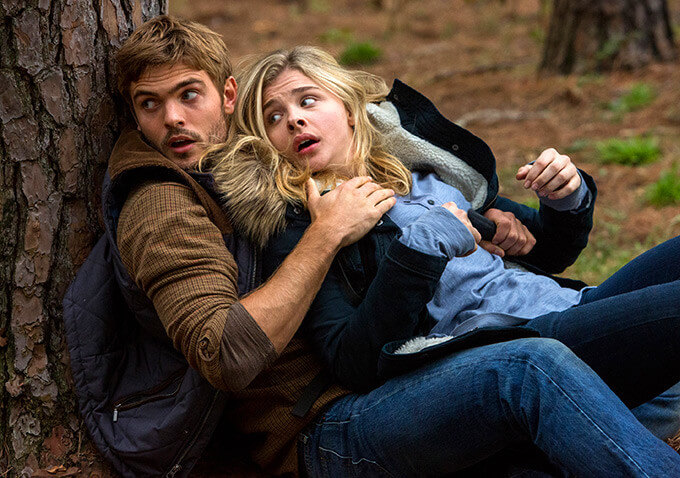 Shortly after the third wave of alien attacks devastated humanity in The 5th Wave, I started reminiscing about the good old days when evil aliens would simply use powerful spaceships to devastate humanity in one fell swoop. Coordinating a series of global blackouts, targeted tsunamis, massive outbreaks and legions of invading body snatchers, seems like way too much fuss. Despite the rigmarole, as we’re waiting for the final wave of destruction, The 5th Wave settles into lame, young adult pap that will surely disappoint even young adults.

The 5th Wave follows Cassie Sullivan (Chloe Grace Moretz), a teenager surviving in the ruins (sort of) of civilization after the third wave of attack by the Others has left only a few hundred-thousands of humans alive. Almost certainly for fiscal reasons, Cassie experiences the epic devastation of an alien apocalypse from her home in smalltown Ohio. Awkward cutaways to the mayhem of the Waves (as they’re called), hundreds of miles away means that the rural Ohio setting feels conspicuously removed from any danger.

Naturally, romance stirs between Cassie and other young adults, and old adults occasionally pop up to do their sinister grown-up bidding. The lousy romance at the center of The 5th Wave is as cold and heartless as any lousy romance that I’ve seen but, surprisingly, it’s not totally due to lack of chemistry. The young adult characters in The 5th Wave are fairly eager to pick up assault rifles and become hateful killers, which robs them of any tangible likability. With a setting removed from the action, unlikable characters played by some serviceable actors, and a creepy penchant for fetishizing guns, The 5th Wave is a tedious-as-hell movie going experience.

Look, there’s nothing wrong with a YA movie being a shameless rip-off of a much more popular YA movie, as long as the rip-off is a good YA movie. There’s a lot of enjoyment to be found in the Divergent Series, which lifts all of the familiar beats from The Hunger Games but still manages to create its own clever mythology. I even liked The Maze Runner, a mostly-male riff on The Hunger Games formula. There’s a lot wrong with rip-offs like The 5th Wave, that rearrange the best elements of better movies to create something that is ugly and, well…boring.

So yeah, The 5th Wave is pretty bad, and it’s the type of “pretty bad” that is bad enough for you to really consider holding it against the folks who produced it. Maybe Chloe Grace Moretz deserves to escape some ridicule, but the little charisma she injects into the film isn’t anything close to the adrenaline in the heart that this movie needs. There are two more books in The 5th Wave series that are ready to be adapted into films. I hope they do better now that they don’t have to worry about any of the convoluted set-up. As for The 5th Wave, it’s failed to establish a compelling base for a franchise, over deliver the cheap thrills of a good rip-off.