Home » Film » We Was Smart Once 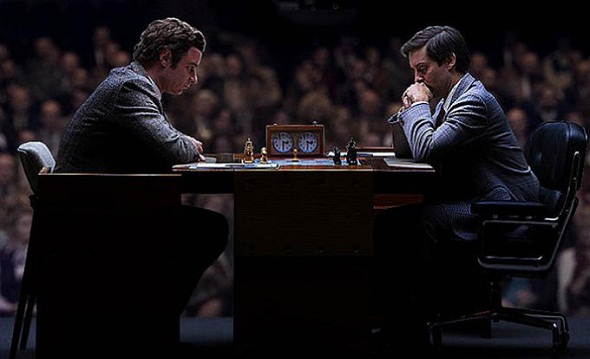 Modern Americans reelected a man who plunged the country into two wars, tortured people and destroyed our economy, all because George W. Bush was the kind of guy you’d “like to have a beer with.” But for a brief moment in 1972, America rooted for the smart guy. To be fair, it was under the cloudy, Cold War spectre of thermonuclear annihilation, so it wasn’t all sugar and sparkles. But in the years since Bobby Fischer stood toe-to-toe with Boris Spassky for the World Chess Championship, intellectualism has become a synonym for prickish arrogance, as Americans have become increasingly convinced it’s better to be “Jane Average” than “Jane Genius.”

This isn’t to say Pawn Sacrifice is going to make folks want to be like Fischer (Tobey Maguire), the anti-Semitic, mentally ill chess champ. The movie opens with Fischer in his youth; troubled even then, he uses chess as a means to engage a world he seemingly loathes. At 12, he plunged into the world of competition, and by 15, he became the youngest grandmaster. Why the chess world and the Ku Klux Klan have similar sounding titles is only a little troubling considering the game pits black and white pieces against each other. But anyway…

The remainder of the film is Fischer’s path to the inevitable showdown with Spassky (Liev Schreiber), which would take place in Iceland in 1972. Although Fischer could give a rook about the political significance, he was the only one. At the height of the Cold War, a Russian squared off against an American in a demonstration of intellectual superiority, and the world stopped to watch. As Fischer is told in the movie, America had “lost China” and was “losing Vietnam.” This was the last symbolic stand. Fischer, however, was too busy with paranoid delusions to ponder the significance.

Pawn Sacrifice is good, very good at times, but not great. This is partially because director Edward Zwick has never made a movie he hasn’t snuck a bloated 30 minutes into. It’s also because, no matter how high the stakes, watching folks quietly move chess pieces is boring. It’s hard not to giggle at slow-motion game play with a big sound effect “thud” when each piece is placed. Pawn Sacrifice also goes a bit too easy on Fischer, whose anti-Semitism was truly hideous and made all the more complicated by his own Jewish heritage. The film seemingly goes out of its way to show Fischer as a victim of his own genius, which he may well have been. He was also a sizeable dick.

Maguire is quite good, switching between glassy-eyed obliviousness and rage strokes. Schreiber’s Spassky, however, is disappointingly underdeveloped. Had the film put the two men in parallel more, it likely would have been considerably more compelling. And yet, as a snapshot of a singular moment in American history and a profile of a genius at war with himself, Pawn Sacrifice acquits itself as a worthwhile endeavor. Or to put it in chess terms, it’s a “check” but not “mate.”