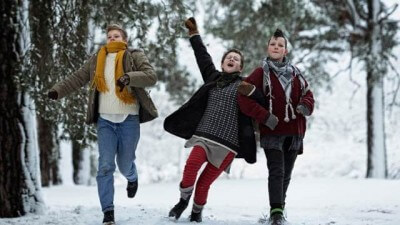 Punk was always as much about the mentality as the sound, as much about rebellion for rebellion’s sake as it was disorganized noise.  We Are the Best (Vi är bast) sports a cocksure swagger in its title alone, and rightfully so. It is a boisterous rejoinder to the usual simplistic, tame depiction of adolescent girls. Writer/director Lukas Moodysson has made a movie that isn’t just infused with punk, it becomes punk itself.

Set in Stockholm in 1982, best friends Bobo (Mira Barkhammar) and Klara (Mira Grosin) are 13-year-old girls who savagely cut their own hair, bitch about their parents and flagrantly disregard the stares of “mainstream” students. When a rock band composed of boys taunt the pair for their short hair and lack of concern about makeup, calling them “the prettiest girls in town,” Klara and Bobo march into their rehearsal space and get them kicked out. The gals figure “what the hell,” so they pick up some instruments and make noise.

And it is noise: awful, discoordinated, ugly sounds that represent what adolescence would sound like if it could make music. When Hedvig (Liv LeMoyne) is taunted for her guitar performance of a Christian song, Klara and Bobo recruit her into their group. The three hurtle themselves at hormonal, youthful romance, while raging against conformity in the most genuine way imaginable.

We Are the Best captures the bipolar nature of youth, from the so-fun-you-can’t-help-but-squeal moments to the leave-me-alone-I-hate-all-of-you times that follow seconds later. All of the girls do a bang-up job shedding the typical young actor “glaze,” that sheen that coats a juvenile performer’s delivery until it looks fake. While Moodysson deserves credit for extracting those performances, Barkhammar and Grosin in particular have their own internal combustion engines that explode with authenticity.

What’s nice is that the movie doesn’t overfetishize punk. In fact, it takes several clever swings at it, with a killer Joy Division blast. But it doesn’t consider the genre to be silly either. Seemingly, Moodysson’s point is that whatever the “feel” of punk is, young people not only understand it, they need it. It’d be difficult to name another film with a climax as affirming for young girls or as unrepentantly confrontational. When booed during their first real gig, Klara switches the lyrics of their song mid-performance. Oh, it’s not to placate the crowd; she replaces the word “sport” in their song “Hate the Sport” with the name of the town they’re performing in.

This journey is exuberant and affirming, full of youthful piss and vinegar. It is that rare film unafraid to endow its young female characters with the full range of traits, the full potential to control their own images and beliefs and the full spectrum of adolescent emotion. When a movie does that and decides to name itself something as hubristic as We Are the Best, you have to smile, stick a fist in the air and nod.