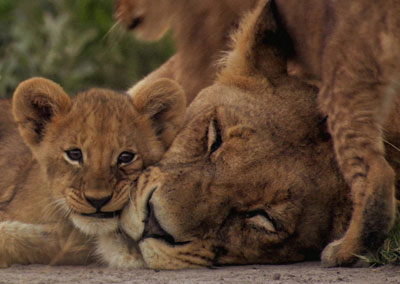 Throaty and sleepy, Jeremy Irons begins his narration of the wildlife documentary The Last Lions as if awoken from a crumpet-induced nap. Any electricity that’s felt by once more having Irons’ voice laid atop images of lions is blunted by a delivery that sounds like Irons is auditioning for a British sex chat line. His dulcet tones seem at odds with a surprisingly riveting story of survival; if March of the Penguins was a family drama, husband-and-wife filmmakers Dereck and Beverly Joubert give us Die Hard with more hair (sorry, Bruce).

So Ma di Tau scoops up her three cubs and makes a break for it, crossing hostile territory to reach a new island to call home. Far from an oasis, the spot is populated by a herd of water buffalo, led by a big bruiser with a scarred face. He becomes a villain as much as “Sliver Eye,” the seemingly evil leader of the marauding lions who decide to follow Ma di Tau to her new zip code. The story, and it is a story, unfolds in captivating fashion, with heart-breaking casualties and cheer-worthy action sequences, elements scripted dramas frequently fumble.

When nature documentaries get didactic, they feel redundant and shallow. Anyone interested in watching a full-length film about endangered animals really doesn’t need convincing that species preservation is a good idea. The best ones, then, show the splendor and value of the environment by telling a wickedly entertaining tale using only natural elements … well, natural elements and an actor with a big buttery voice you never tire of hearing.

Even the language in the narration is smartly handled. In the face of a hard-won battle, Irons intones, “Africa is as dispassionate about victory as it is about loss.” A statement like that is more revealing and insightful than a verbal treatise on conservation or modern progress. Of the myriad of ways to make someone care about something, the most effective is just handling the material with clever grace.

Although the hyenas are decidedly less Whoopi-tastic, enthusiasts of The Lion King will find much to love in this tale of family adversity. But be warned: The Last Lions is no Disney movie. The film doesn’t fade to black over a delightful Elton John ditty but moves towards its finish with a contemplation that begins “we don’t know about animal grief.” A final happy beat or two aside, consider yourselves warned.

The Last Lions does nothing new but many things well, and that should be a fine source of, ahem, pride for all those involved.