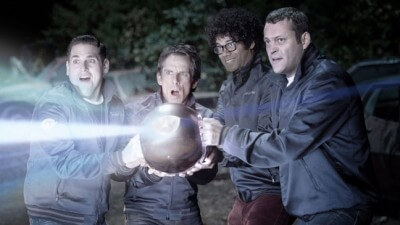 Seeing as how it has an extraterrestrial plot, let’s describe The Watch using an astronomical metaphor. Ben Stiller, Vince Vaughn, Jonah Hill and Richard Ayoade are like comedic planets that orbit a central, burning sun…and that sun is made entirely of penis jokes. Someone spent $70 million to make a movie in which aliens only die if you shoot them in the pee-pee, in which an alien is killed by having his thingie ripped off and in which the funniest moment is a Spanish version of Simon and Garfunkel’s “The Sound of Silence.”

Sadly, nobody can smoke any more weed because writers Jared Stern, Evan Goldberg and (for shame) Seth Rogen smoked it all while creating what is essentially two hours of product placement and junk jokes punctuated by Vaughn, Hill and Ayoade accidentally making something funny happen. And no, leaving Stiller out of that list was not an accident. Because the gang used up all their cleverness inventing the alien’s weakness, the rest of the plot is simple.

Stiller plays Evan, a gung-ho go-getter who manages a Costco and is so enthusiastic about his small community he starts a billion stupid groups. In the wake of one of his employees being disemboweled, he starts a neighborhood watch made up of a violent psycho (Hill), a dad in need of dude time (Vaughn) and a British nerd (Ayoade). They find out aliens are invading earth through a device in the Costco. The end.

You are not prepared for the amount of stillborn attempts at character development in this movie, including bizarre secret infertility and father struggles that seem to justify murdering your daughter’s potential sex partner. But the most irritating thing about The Watch is how boring it is. Strike that; the most irritating thing is remembering the times Vaughn had you clutching your sides, the movies where Hill had you doubled over, the fact that Ayoade chose this as his American introduction and the era when Stiller wasn’t the bland, tofu-flavored screen-time suck he has become.

That said, there will be no refunds, because you get what you pay for: Vaughn spews fast improv, Hill cracks dark and wry jokes, Ayoade is delightfully awkward and Stiller is every bit the star of two Night at the Museum movies. What’s sad is that this is another massive sci-fi comedy failure, again leaving the first Ghostbusters to die alone. Given the limitless potential of that imaginative genre, it continues to be shocking that nobody can find a way to play in that arena and actually be funny.

In all honesty, things like the male-member-based humor is less offensive than it is a sign of laziness; it would take more energy to be bothered by this movie than to just forget it. The film was renamed from The Neighborhood Watch to The Watch in the wake of the horrifying Trayvon Martin tragedy. In any other year, this tepid, drab film would have been the worst event associated a local watch organization.