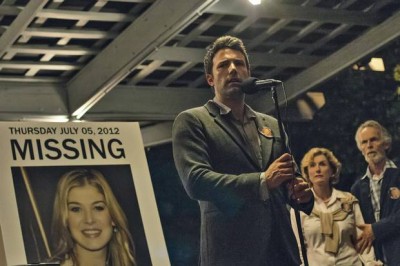 With as much fanfare as such an announcement could receive, news spread across the interwebs that Ben Affleck would dangle his dongle in Gone Girl. As the thespian proclaimed to MTV Today back in September of last year, “There’s some brief, very brief, nudity. The penis is in there.” This was to be no mere backside salute, the standard exposure for male stars. No, my friends, “The penis is in there.”

And then the movie came out, and most people saw no wang.

That’s not an indictment of the size of “lil Ben” but an indication of just how brief and subtle his python placement was. Harder to miss was Affleck’s grabbin’ and squeezin’ of the fully exposed jugs belonging to Emily Ratajkowski (aka, “Blurred Lines” video girl). Unsurprising, considering the climate in Hollywood allows Seth McFarlane to open the Oscars by listing the names of actresses whose breasts he’s seen while staring those actresses directly in the…eyes. To say there is a disparity in how the human body is displayed onscreen is an understatement.

Jim McBride, the bon savant who created a website dedicated to archiving female nudity in film called “Mr. Skin,” told the New York Daily News last May that he has over 700,000 nude photographs and video clips of women, and maybe a few thousand of men. In 2013, McBride launched a companion to Mr. Skin, Mr. Man, which is dedicated to male nudity in movies. Not that the standards are vastly different or anything, but your choices of “Playlists” on Mr. Man include “Chiseled Chests,” “Hunks of Horror Movies” and “Studs & Suds,” while your options for Playlists on Mr. Skin include “Boob,” “Bush,” “Race” and whatever the hell “Skinfinitions” is.

Beyond the overwhelming disparity in terms of amount and frequency of flesh on screen, a more alarming thing happened in 2010, when the MPAA began specifying “male nudity” when providing their rationale for ratings. You see, because apparently there’s “normal” nudity, which means ladybits, and then there’s “male nudity,” which is so mortifying to the MPAA folks they want to warn you of dick danger. It should be noted that although the MPAA fears the peen, they have no problem whatsoever with the use of firearms as phallic substitutes, but that’s a discussion for a different day.

The coup de gras for anyone who cares to know such a thing, and sorry to be the bearer of bad news for those anxiously awaiting: 50 Shades of Grey will be 100% dong-free. That’s right, a movie based on a book that literally only exists to arouse will be devoid of what author E.L. James referred to as Mr. Grey’s “considerable length.” No statistical information can better show the disparity in how men and women are shown onscreen than Mr. Grey keeping his willy in its wrapper.

But let’s try some stats too: In 2013, Nick Zurko of the New York Film Academy provided an infographic that examined how women were portrayed on screen in the top 500 films from 2007-2012. When it comes to nudity, 26.2% of women actors get partially naked, compared with 9.4% of men. The percentage of teenage women depicted with some nudity increased 32.5% from 2007 to 2012. Roughly a third of all women with speaking roles in movies during the time period studied were shown in sexually revealing attire or partially naked. Holy unequal exposure of underwear zones, Batman!

This overwhelming disparity matters for two reasons: First, because it reinforces the unequal sexualization of women, and second, because exposure to the human body normalizes reaction to it. We all know that popular culture, and film in general, has a remarkable influence on public perception and, thus, reality. There is an inherent sexual power imbalance demonstrated when one participant is clothed and the other is not. The implication is a sense of control, with the clothed (or nonexposed) individual being less vulnerable. When a third of all women in movies are depicted with this amount of naked inequality, the result is an unspoken message of dominance by men.

Although he tried to play it off as some kind of satirical incrimination of this nude imbalance, Mr. McFarlane’s tasteless, classless ditty did at least show how pervasive this all is among the most revered actresses. That is to say, even the most powerful women in Hollywood are expected to adhere to a standard that says thumbs up to nekkid ladies and thumbs down to dudes. A-list celebrity men are not asked in interviews if they would “consider doing a nude scene,” while rising stars who happen to have ladyparts are peppered with such questions. See scores of interviews with Lawrence, Jennifer or Watson, Emma.

A report by the Center for the Study of Women in Television and Film at San Diego State University found that only 7% of the 250 top grossing domestic films had a woman as director. As much as the unequal nudity on set visually communicates an unbalanced power dynamic, the very literal events on set consist most often of a clothed man (director) telling actresses to part with their costumes. The lack of representation for women behind the scenes is troubling for many, many reasons, but when coupled with this fleshy imbalance, it reinforces some of the worst sexual aspects of our patriarchal culture.

The solution isn’t for America to clutch pearls (not a euphemism) and dive back into Puritanical closets. Countless psychological studies and cultural examinations have proven that exposure to thoughtful sexual interaction and nudity helps destigmatize the human body. Compared with many other countries, America’s reaction to the exposed human form is downright hilarious. We’re still at “butts only” on television while most of Europe is bumpin’ uglies on screen. The implication of omitting nudity from popular culture provides a suggestion that a naked body is something that should inspire shame.

This is why it matters that Ben Affleck, our future Batman, dropped his utility belt. He shouldn’t be somehow deified for doing what actresses are seemingly required to do as part of their job, but an A-list box office dude showing his Howdy Doody is a step in the right direction. Were movies to find a better equilibrium, holding a similar standard for both sexes, it could help deconstruct the real-world imbalances or at the very least stop reinforcing it. That’s right folks, the answer isn’t to avoid plot-necessary and character-enhancing sex scenes or nudity. To paraphrase, the answer is to “get the penis in there.”