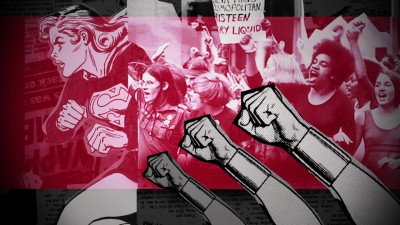 In the world of documentaries, Wonder Women! The Untold Story of American Superheroines! falls on the end of the spectrum that doesn’t rely on graphic images or astounding facts to evoke a wide range of emotions. Rather, it is a simple exploration of women…and feminism…and their role in pop culture. Simple enough, right? Although the film is independently made, it is far from low quality. Rather, the filmmakers brought in experts, feminists, historians, comic book enthusiasts and celebrities to tell the story of female superheroines. From Gloria Steinem to Lynda Carter to a fourth-grade girl who is an avid Wonder Woman fan, the film covers all its lady bases.

Filmmaker Kristy Guevara-Flanagan provides an in-depth history of the subject matter, as every aspect of Wonder Woman is placed into historical context: everything from her inception to the dark time…when Wonder Woman no longer had powers and chose instead to open up a clothing store. The film places all of this into a larger historical context, giving the audience a deeper understanding of who the fictional Wonder Woman was, the themes she was reflecting, and what her future may look like.

That being said, the film unfortunately falls victim to the oh-so-common plague of an unclear vision, creating marginalized voices. It is true that an understanding of feminism leads to a more critical analysis of Wonder Woman and other super heroines; however, the film prefers to focus on female super heroines first and discuss feminism when it can. A documentary about feminism in popular culture filtered through the lens of female superheroines would have had far more impact.

What’s more, the film tries to pull in so much information from so many sources that the original narrow focus gradually broadens, muddling the original direction of the film. As a feminist film, it is necessary to reach to the heart of feminism (paging Ms. Steinem). With Wonder Woman being more popular among women than men, it is not surprising female experts are represented more than males. As odd as it may sound, there is a notable paucity of male voices in the film, as only 2 that are highlighted. And, of those shown, half are straight. In the current climate of American feminism, choosing to only show such a small percentage of male feminists is actually counterproductive to the film’s thesis. Although it is targeted toward women, a film this entrenched in feminism and in a medium (comic books) so popular among male fans, it fails to address those who are often marginalized in the feminist movement: men.

Overall, the documentary holds plenty of information and draws attention to the implications of female superheroines while somewhat addressing modern day feminist movement. The feeling of empowerment and motivation to work toward a more equal future is certainly conveyed by Wonder Women! William Moulton Marston, the character’s creator, believed that by the 2040s, America would be a matriarchal society. There are still 30 years to go. Who knows, maybe by then we’ll all be Wonder Women.