Home » Film » For Lack of Mouthwash 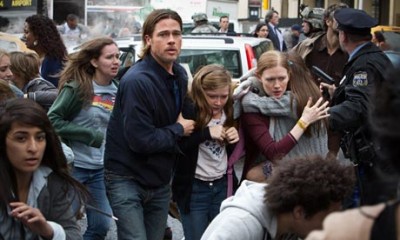 From the seemingly infinite production companies behind World War Z, the must see movie of next summer is Ninja Squirrel Poets* (*note: does not actually feature ninjas, squirrels or poetry). As has been well publicized, Brad Pitt’s company, Plan B, snapped up the rights to Max Brooks’ thoughtful, faux-historical retrospective novel and then promptly scrapped everything but the title. Turns out, they disregarded most of that too, in that the film World War Z features no war. Technically, it does take place on a planet, so it satisfies the “world” in its title. But unless the “Z” is meant to invoke onomatopoetic snoring, two thirds of the title is still a lie.

Pitt plays Gerry, the world’s most smoldering former U.N. inspector. The central character in Brooks’ novel was but a recorder; his defining characteristic was that he took good notes. In the film, the dullard and the dullard’s family are at the absolute center. Instead of a rich tapestry of voices, composing the most complex, vast take on a zombie apocalypse ever endeavored, World War Z is just more “walk slow or the undead will hear you” redundancy.

Gerry gets tasked to track down the origin of disease turning humans to twerking corpses. That’s hard to do when superfast biters are everywhere. He sets off to South Korea, stays long enough to meet a toothless David Morse and pick up a clue that sends him to Israel. Israel is actually doing pretty well, having built a huge wall. And that wall will keep them all safe, provided not a single zombie gets in because then they’d just be a Kosher buffet. From Israel, it’s off to Wales for the obligatory “sneak past brain eaters” sequence. The twist this time? Even though the zombies have vision, they only really respond to sound. So the heroes have to be as quiet as the disinterested audience.

The worst, most aggravating moment is a nonspoiler saved for the final moment. In a voiceover, Pitt briefly describes the movie that was promised, teasing that if World War Z somehow recoups what is an infamously bloated budget, maybe they’ll do next time what they said they do this time. It’s not so much that the film is a poor (or non-) adaptation because different can be good. In this case, not so much.

Pitt glowers and grimaces, trying to beat back the hordes that threaten him by sternly pouting. The lack of hyperbolic reactions by all involved is almost as unbelievable as the fact that cell phone reception never cuts out and that Pitt cracks the mystery at the end thanks to a soldier’s limp. And speaking of limp… World War Z is not the complete, absolute disaster tales of its production suggested may come to pass (what with an entirely reshot third act). But that’s the limpest compliment that can be given, as “it’s not as bad as I thought it would be” has never sent anyone’s heart atwitter.