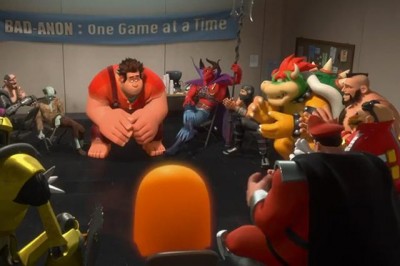 For a generation weaned on more Mario than Mother Goose, Wreck-It Ralph has been a long time coming. An 8-bit fairy tale with a burly bruiser in the role of the misunderstood princess, it skews a tad more prepubescent than Pixar but shares similar DNA. Writers Jennifer Lee and Phil Johnston won’t be unlocking any bonus levels for originality, with a conceit that feels poached from Toy Story and a take-home message espoused by almost every kid-targeted piece of entertainment in the last half century. But with boundless energy and enough saccharine sentiment to win an entire cupcake crusade, let alone a mere war, Wreck-It Ralph is basically calorie-free comfort food.

Set in an arcade where the characters in the games come to life when nobody’s watching, the film follows Wreck-It Ralph (John C. Reilly), who is basically Donkey Kong without the hair and plumber problem. His “job” is to smash the crap out of a building so that Fix-It Felix (Jack McBrayer) can use his magic hammer to do repairs. Only Ralph is in the midst of a pixelated existential crisis, no longer wanting to cause mayhem and destruction but create unity and joy. Despite AA-style self-help meetings designed for “bad guys” to not feel like bad guys, Ralph is forlorn.

So he “game hops” in search of accolades to prove his worth, landing in “Heroes’ Duty,” a first-person shooter led by a no-nonsense gal named Calhoun (Jane Lynch). By accident, Ralph winds up in “Sugar Rush,” a kart-racing game inhabited by a spunky kid named Vanellope (Sarah Silverman). Before you can say “awkward friendship,” Ralph finds himself helping Vanellope battle King Candy (Alan Tudyk) while Felix and Calhoun fight the alien menace that accidentally followed the characters to the childlike racing game. The soul-searching quest for identity moves at a relentless pace, only pressing pause for “duty vs doody” jokes.

Director Rich Moore snaps off the gearshift at its high point, never letting the film rest, which works perfectly in a film targeted to kids who grew up with fruit-fly attention spans. There is no sophistication or depth to Ralph’s “find my place in the world” struggles, nor to the copious bodily function jokes, which isn’t to say both aren’t somewhat effective. Silverman’s voice is sometimes cloying, and it’s possible that the film sets a record for “most weepy-eyed CGI characters,” but it’s all so well-intentioned that it is easy to forgive.

Many have praised this as the first truly great “video game movie.” It most certainly isn’t. It’s simply a fairy tale movie; a classic Disney yarn dressed in video game trappings. It is no more the “first great video game movie” than Snow White was the “first great movie to espouse buying organic produce.” The growing animosity between those who feel games are a fertile artistic medium and those who abhor that concept will have to wait for another champion to settle things. Wreck-It Ralph is too busy being cute, sweet and generally adorable to make any substantial contributions.