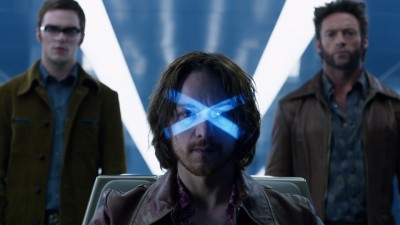 Of the many things that director Bryan Singer would like to hide and forget, the X-Men movies made without him should be nowhere near the top of his (allegedly) vile list. Still, clearly at Singer’s behest, X-Men: Days of Future Past sticks its fingers in its ears and yells “nananana I can’t hear you” when it comes to preserving the continuity of a film series that has been drudging on for a mind-numbing 14 years now.

The last entry, X-Men: First Class, was actually the best of the bunch. So, naturally, everyone decided to immediately abandon everything that made that film original and entertaining in favor of yet another dose of apocalyptic fetish. Every light moment in the film hints at what could have been, had the hands inside these mutant puppets not belonged to Singer and writer Simon Kinberg. As such, DOFP is solid, epic, action-packed and good-looking but uber-familiar. It’s a danceable but tepid techno remix of the stale superhero cinematic formula.

As if ignoring some of the previous movies wasn’t confusing enough, this installment heavily relies on time travel and introduces scores of new mutants whose names are barely used, leading to post-viewing comments like “When Knifey Guy and Pink Hair Glitter Girl did that one thing, it was cool.” Opening in the future, the few remaining mutants are gettin’ whupped on somethin’ fierce. In an act of desperation, Kitty Pryde (Ellen Page) sends Wolverine (Hugh Jackman) back into his younger self in the 1970s, using her mutant power of glowy hands.

In the past, Wolverine must stop Mystique (Jennifer Lawrence) from killing inventor Bolivar Trask (Peter Dinklage), which was the event that sparked the war on mutants in the future. To stop her, Wolverine needs young Professor Xavier (James McAvoy) and young Magneto (Michael Fassbender) to squash their beef and help him talk sense into the blue would-be murderess. A bad Richard Nixon impersonator is also present.

Let’s eat our veggies before we get dessert. Here’s the bad: If you didn’t grow up in X-Men Underoos, you may be very, very confused. Despite the fact that almost every line of dialogue is some modified exposition, it relies heavily on a knowledge of X-Men lore…and not the movie versions, most of which don’t count. The other major negative is the grim, dark tone. A thousand blessings on the next comic book movie that doesn’t dress in Armageddon chic.

That said, man are the action set pieces cool. Even the one that could have been the worst, Quicksilver (Evan Peters) jailbreak of Magneto, ended up being the best. And double extra kudos to Kinberg for making a blockbuster where the major keys to the film’s climax are the emotional choices and personalities of three major characters (Mystique, Professor X and Magneto).

X-Men: Days of Future Past is a viable, sure-fire hit that delivers exactly what was promised, but little more. In studio speak, that makes it a perfect film, even if audiences may be slightly disoriented.