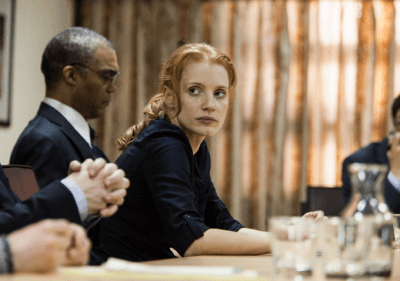 That members of the US Senate have spent more time discussing the fictional depiction of torture in Zero Dark Thirty than they spent discussing the actual torture the military was performing in the wake of 9/11 is yet more proof that “congress” is the opposite of “progress.” Of course, this isn’t to say that director Kathryn Bigelow and writer Mark Boal aren’t challenging our ethics. They certainly are, and they found such a cunning way to do it.

They bury their questions beneath the most deafening applause good, honest Americans have ever given for the death of a human being in the modern era. For a decade, Osama bin Laden was a national bogeyman, making Zero Dark Thirty as much Jaws as it is Blackhawk Down. The laborious, mostly narrative-free endeavor is a slow-motion examination of the line between determination and obsession and a reminder that stopping evil just may take evil, and we shouldn’t pretend otherwise.

The film opens with one of the most horrific and jarring sequences in memory, and not an image is displayed. The sounds of 9/11, the phone calls to loved ones, the television reports, the noise and confusion play out over a black screen. Because the film only works if we remember the bloodlust and anger America collectively felt, it’s a masterful way to refresh those feelings without exploiting the audience. It’s also the last truly breathtaking moment until the final sequence.

We meet Maya (Jessica Chastain) as she watches fellow intelligence agent Dan (Jason Clarke) torture the ever-lovin’ crap out of a man who is chained to the ceiling, waterboarded and forced to soil himself. She hates it. She is disgusted by even being there. But she doesn’t leave.

Although the film skips time fairly often, watching Maya’s quest for the next decade is exhausting, confusing and completely devoid of personality. Chastain was nominated for Best Actress Oscar because she managed to squeeze a full character arc solely through body language, pouty lips and “oh-no-she-didn’t” sassy language. Over the years she bumps heads with her boss (Kyle Chandler) and doggedly pursues a theory regarding bin Laden’s message courier. Spoiler alert: her hunch is right.

The last 40 minutes is the white-knuckle military raid promised in every trailer. It makes sense; how many would go see a movie sold as “watch as one women relentlessly does research!” It’s perfectly shot, exquisitely paced and, most importantly, clearly edited. It is easy to feel the payoff in the moment for Maya, as it feels like we too have waited a decade for this moment. It’s also the only time Bigelow’s slight-shaky-cam style actually feels relevant.

Sold as an action movie, Zero Dark Thirty is actually an inaction movie, as at one point Maya literally keeps track of days of immobility that pass. Beyond the basic portrait of the artist as “a cagy female CIA agent,” this is about a question: was it worth it? America tortured people. That’s a fact, even if we’re inclined to place it in a box on the cultural shelf right next to Native American genocide and slavery as things we all pretend to forget. The question this movie asks using “black stealth helicopter” action is whether it was the right call.

Maya doesn’t become jaded; she gradually learns to accept that torture is the most efficient, most effective way to do her job, a job that means saving and avenging lives. The movie never sanitizes the torture when it is shown, never glorifies it. The theory that somehow this film is a defense of such behaviors is reprehensibly stupid and should be dismissed as the idle patter of someone self-important. But it’s clear Bigelow and Boal want you to think on what we did, to remember that our “triumph” in killing the world’s greatest terrorist came at the expense of the world’s greatest moral authority. Was it worth it?

Judging Zero Dark Thirty as a movie is hard. It has no narrative, feels way more like a blow-by-blow ABC News reenactment and would make for a way, way better documentary (after all this is “fiction”). The hubbub and praise it has received is understandable if somewhat hard to echo. In other words, the intelligence assessment here is “good, but not great.”