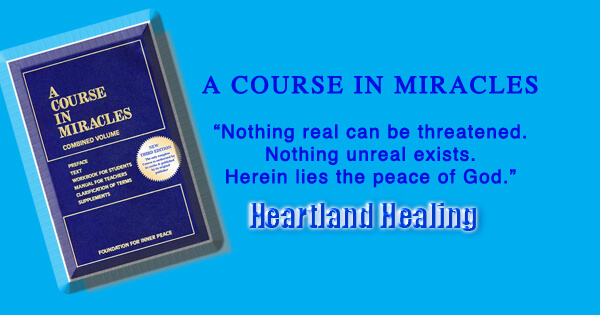 A Course in Miracles

1983 seems a long time ago. And it would be — if there were such a thing as time. Since it’s common in metaphysical circles to dismiss the notion of “time” as being a necessary construct of human egocentricity, let’s accept that for now, though it’s incidental to the topic.

It was in April of 1983 that I met Mimi. I introduced her to sushi by taking her to my favorite sushi bar in North Hollywood. She returned the favor by introducing me to A Course in Miracles, taking me to Carolyn Fuqua’s home in Benedict Canyon.

Carolyn and Harvey Fuqua hosted a group meeting each Thursday night to study, discuss and otherwise contemplate a relatively new publication, A Course in Miracles. First broadly published in 1975, ACIM or the Course as it is often referenced, has no listed author— only a publisher: Foundation for Inner Peace. Mimi told me I’d like it and to give it a try. She was right.

Courses for horses. My interest in the esoteric view of reality started at an early age. When I learned at age 10 that what we see with our eyes is merely an illusion of solid matter and that we and the universe we live in is essentially made of nothing but energy, I wondered. Don’t get me wrong. I didn’t spend the rest of my childhood wondering about it. I played with toy trucks, rode my bicycle, played sports, tolerated Catholic grade school, high school and university and learned to be grateful for that introduction to a spiritual view of the world.

But religion still led with too much emphasis on the physical. I was interested in energy. Eventually I recognized that thought itself is a form of energy. We just had not learned to measure it fully. Western science didn’t recognize cosmic rays, electricity, radiation, light and even sound as representations of energy until we learned to measure them. So it’s not outlandish to see thought as energy that we just haven’t learned to fully measure.

With one of its basic tenets of “thought is creative,” the Course was a natural for me. With its stated goal of peace of mind, who wouldn’t want to pursue that? The Course then looks at the basic law of the Universe: Cause and Effect. And if thought exists as a non-physical entity, then what caused physical ones? It’s easy to see that any and all physical things are always preceded by a thought. Therefore the flow of cause and effect goes from thought to form, not the other way around. That may require a slightly lengthier explanation and that’s available if one wants it. That’s part of what the Course explores.

The Books. The Course was published in three volumes as a Text, a Workbook for Students and a Manual for Teachers. The words contained in each were received by a woman named Helen Schucman, a psychology professor at Columbia School of Medicine. The inner voice that dictated to her responded with “Jesus” when she asked his name. Detractors malign the Course and scoff at the notion. Regardless of the provenance, the Course unquestionably follows a solid line of logic and is based firmly on psychology and physics, not to mention spirituality.

The Text provides an academic underpinning. The Workbook provides a series of 365 lessons that act as a tutorial to reverse the common belief that cause is without and that we are the effect of the world. Following the lessons, one learns that thought is cause and the best tool we have to achieve peace is our mind and learning how to use it. Finally, the Manual for Teachers elucidates the goals of the Course, basic interpretations of roles and suggestions for application.

For today. The Course is not “new age psychobabble” as some skeptics berate. The ideas in the Course are not new. They are timeless teachings that resonate through many forms of spiritual study common to both Eastern and Western mindsets. What the Course seems to do in a unique way is to explain and describe mankind’s conscious search for peace and connection with the ultimate energy of the Universe by couching it in modern terms. Longtime students of the Course recognize that it is perhaps Christian based because Christianity is a prominent theology at this moment in history. Longtime students also recognize that the Course reflects terminology that is common to current Western thought and society. In one way of looking at it, the Course is eternal teachings that are suited and typecast for our 21st century experience.

The Course has no central leader or organization. The Course has now even entered public domain so there is not even a recognized official publisher. The Foundation for Inner Peace remains the original publisher and was endorsed by Schucman and her closest collaborators so provides a certain imprimatur.

Many have come to identify the names of several New Age standard bearers with the Course, even going so far as to identify those pop figures as the “authors”. While some, one example is Marianne Williamson, have managed to make a career of promoting their interpretation of the Course, the Course best stands on its own. It is a unique instrument for self to rediscover Self. And, of Course, peace of mind.

California Rolls and tempura are not sushi. Marianne Williamson’s books are not the Course. Authenticity cannot be watered down. Both nigiri sushi and A Course in Miracles are worth experiencing. For more on the Course, go here.