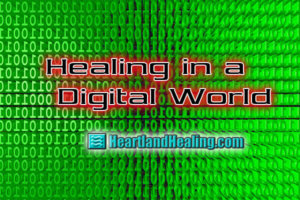 Across the Great Divide

Healing in a digital world

History shows that a society is shaped by its dominant technology. In the 21st century, society is now globally singular, geographically unbound. Our dominant technology is digital, reality reduced to ones and zeros. Our society has become as polarized as our technology. I know a thing or two about digital. I may not have built the train we rode on in 1979 but I was in the front car. In fact, I was the engineer.

The 20th Century may go down as the most pivotal in the history of humanity. One might say it was the moment when humans swerved from the intuitive, natural course and careened onto the intellectual, technological path. It was the century when we developed ways to look inside the body with x-rays; kill the tiniest of living beings with antibiotics; unleash the greatest energy from the smallest source with atomics; cross the airwaves with voice and picture; bring day into night with electricity and move quickly around the planet with combusting engines. (The appropriateness of all of those “advances” could stand reevaluation.)

Nothing in that litany of human legacy compares with the development of a method to reduce every natural and human experience to just two digits: a one or a zero. Digital technology gave humankind more power than ever before. With digital we have become able to quantize every single thing in existence in terms of a binary reality. Nothing in our world any more escapes the ability to be quantized, enumerated and stored in a field of digital numbers, able to be manipulated and disseminated rapidly and extensively. By reducing all or our experience to the digits 1 or 0, we are able to give that information to the mighty computational skills of the computer, a device with no gray areas because it has no gray matter. A computer knows only “yes” / “no”, “on” / “off”, “+” / “—“ and “1”/ “0”.  There is no in-between.

That leads us to binary math. Let’s not go entirely there. Let’s just explain that several ways can mathematically represent a value. Our base ten, the one we are used to, might say there are “12” eggs in our basket. Base two math — also known as “binary” because it’s only using two digits, 1 or 0, to display the amount, — would represent that amount “12” as 1100. That’s a way to show the same number of eggs using only the digits 1 or a 0.

Dig it. To understand how revolutionary digital reality is, one has to understand what analog reality is. Analog is a continuously variable assessment of reality that is in one way only analogous, reflecting change as it happens. Digital, on the other hand, assesses reality by estimating a value for the experience and freezing that value in a number. Though the reality changes continuously (waves on the ocean don’t stop in between measurements) the estimation of that value only happens when the computer is able to do another measurement. The computer takes a measurement, stores that measurement, then turns around to take another one, even though reality has changed slightly in between. The faster and more often the computer can turn around to measure or “sample” the reality and turn it into numbers, the more accurate its rendering of reality is. 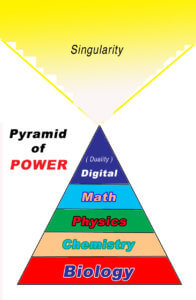 It all sounds techie crazy and theoretical in words. That’s why I like to display it in terms of sound. It’s relatively easy for most of us to envision sound as a continuously variable wave. That’s how analog sound works. Now think of recording, the way we used to do it in analog: A sound wave comes out of a voice by moving particles of air. The waves of air molecules hit a diaphragm in a microphone (think very thin, sensitive disc). The disc vibrates, magnetically converting those waves into waves of voltage, sending those voltage waves of electrons into wires attached to a recorder that sends those waves of electrons onto a piece of magnetic tape that has little particles embedded in it. The magnetic particles store the actual value of the voltage that those waves were changed into at the microphone. Those voltages in the microscopic magnets stay there and their values can be deciphered when we play back the tape. The playback is an analog of the original sound that came out of the singer.

Digital on the other hand wants to store that information in a computer and computers are designed to only understand a “1” or a “0”. So that wave form has to be given a digital representation of that sound wave. The only way digital can do that is to take a sample of that wave, convert the complex analog number of that value (voltage) into a number represented by only 1’s and 0’s. Now that value represented by any line of 1’s or 0’s can be stored as such.

The shortcoming of that is that at any given time, digital provides only an “estimation” of the total value of that experience.

Give it up. So here we are. For the sake of mathematical power, we now have fully embraced a digital reality. Everything in our life experience is digitized. Our entire perception of reality is now reduced to a system that knows only 1 or 0.

When you have only two values to be used, you have what we would call “polarity.” Life is either now a 1 or a 0. In fact, digital systems originally used a “plus” voltage for a “one” and a “minus” voltage as a “zero.” Life is now “polarized.”

I can think of no better example of polarization than the experience we have in society right now. Globally and locally we are seeing a polarization like never before. Our digital world has become a digital society. The only way to heal the duality is to achieve singularity.

As history shows it always will, society has become a reflection of its dominant technology. Time for the healing to begin.

Heartland Healing is a metaphysically based polemic describing alternatives to conventional methods of healing the body, mind and planet. It is provided as information and entertainment, certainly not medical advice. Important to remember and pass on to others: for a weekly dose of Heartland Healing, visit HeartlandHealing.com.
2019.12.10