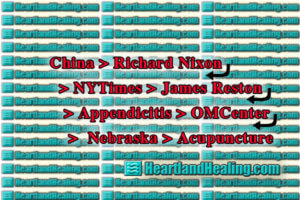 James Reston woke up in Peking ready to go to work. He called it Peking because that’s how the Chinese capital was known in July of 1971. Reston had a busy day ahead and within a couple of hours he was prepping for a series of interviews with important heads of state. As a distinguished columnist for the then-prestigious New York Times and a member of the press pool accompanying President Richard Nixon and special envoy Henry Kissinger, he was set to interview none other than Chairman Mao. For thousands of years, China had been a sleeping giant as far as world politics and trade were concerned and President Nixon was set to change all that by opening up the beast of the East.

At precisely 10:30 a.m., as Reston sat in a conference room at the Peking International Club, he “felt the first stab of pain across my groin.” By nightfall, his temperature soared and 36 hours later, under exceptional care of his Chinese doctors, he was minus an appendix.

Poke and smoke. That’s not the unusual part of the story. James Reston had his appendix removed and his post-op pain treated not with drugs but with acupuncture as the sole anesthesia. Needless to say, Reston was impressed that his doctors in China used medical science that had been described in The Yellow Emperor’s Classic of Internal Medicine from 2000 years ago. Acupuncture had been in use for at least 2000 years before that. So, with the insertion of three slight needles not much bigger than a human hair and the burning of a Chinese herb, Reston’s pain was gone and he slept, on his way to recovery.

Two weeks later, Reston wrote about his experience with acupuncture in his column in the New York Times. When Nixon learned more about it, he sponsored research of Traditional Chinese Medicine at UCLA Medical School and the validation of a traditional course of treatment that had stood the test of centuries began. A small but dedicated group of practitioners, mostly on the West Coast, were using acupuncture as a therapy. Most of them had traveled to China to learn the full background of the technique and brought the knowledge back to the States.

Over time, some states began to regulate the use of the technique. Doctors and dentists, as licensed medical practitioners, were allowed to use it. Others who could produce documented expertise were often waived in. But overall, state health departments didn’t know what to do with the practice. Some states made it legal as a standalone therapy, others did not. I personally had my first acupuncture treatment in Tokyo in 1977. My Scottish terrier had her first acupuncture in North Hollywood in 1986 and a lifelong allergy she had was cured, full stop. But across the country, though acceptance by the general population was growing, acupuncture languished in the areas where it was less accessible. Nebraska was one of them.

OM-Aha If you don’t know who Sandy Aquila is, you should. Ms. Aquila has been in the vanguard of forward thinking therapies since the 1970s. One of the first licensed massage therapists in Omaha, she became passionate about the wisdom of time-tested therapies that have been commonplace in Ayurvedic medicine and in Traditional Chinese Medicine for millennia. Her commitment to those paths of healing galvanized into a desire to make them legitimately available in her home state of Nebraska. Using some innovative lobbying techniques, she and her associates lifted massage therapy into the field of licensed practice in the state, removing forever the stigma of “massage parlor” from the lexicon.

To the point. The mission did not stop there. By the 1990s, qualified, well-trained acupuncturists in Nebraska were helping people with health issues. But their stature was not guaranteed by statute. An Attorney General’s opinion had opened acupuncture to doctors, dentists and chiropractors but someone who may have studied Traditional Chinese Medicine at a fully accredited college and completed national licensure requirements was still not legally able to offer the therapy in Nebraska.

That anomaly changed on March 14, 2001. Nebraska governor Mike Johanns signed into law a bill that went on to benefit countless Nebraskans. LB 270 provided for the licensing of acupuncturists in Nebraska who have met the rigorous training that the bill stipulates.

Instrumental in the adoption of LB 270 was the work of the Nebraska Oriental Medicine Association. NOMA was a consumer group founded by Ms. Aquila, Cynthia Defilippo, Letitia dePallares and attorney Shelden Lebron.

Licensing acupuncturists in Nebraska was an example of expanding medical freedom to our citizens. If someone chooses to use something more natural than drugs, surgery, unproven injections or invasive interventions to address health issues, that freedom is still available — for now.

There are signs that our medical freedoms, choice over our own bodies, are under siege. Many people have worked to expand those freedoms over the years, freedoms that should not be lost now.