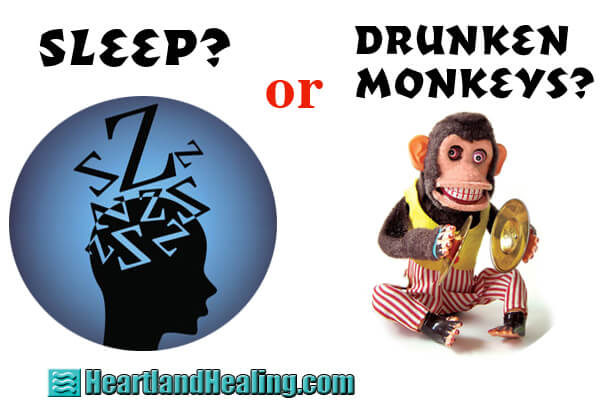 Ahh, to Sleep, Perchance to Dream

Liz Taylor couldn’t sleep. She had become dependent on substances that eroded the natural sleep process. Soothing slumber eluded her. Detox was the next step and her personal assistant, Roger Wall, was on the phone asking me for help.

A couple years earlier, Wall was Barry Manilow’s PA during the recording of Paradise Café. I was engineer and the role of controlling the recording process, acting as the conduit responsible for assuring the technical and often the musical integrity of an artist’s work, can be daunting if not downright stressful.

Typically, some engineers resort to nicotine or alcohol or pot in response to the stress of a thirty-piece orchestra and world-class musicians relying on your competence in committing their labor to tape. I had tried some of those methods (and others) and found them lacking. But I did find that an herbal tea elixir was an effective and benign nervine during recording sessions.

My homebrew was a combination of three herbs long known as natural relaxants. The only undesirable side effect was the pungent aroma. One of the herbs, valerian, smelled almost exactly like month-old sweat sox left on the floor of an unopened athletic locker.

One day while working with Manilow, Wall asked me what I was drinking that carried such a malodorous waft. I told him it was my herbal concoction brewed to take the edge off stressful sessions. I regaled him with tales of the restful qualities of valerian, skullcap and lady’s slipper, the three herbs I used, and told him that a cup or two before bed helped me slip into sleep without a care — and more importantly, without a drug hangover.

Now Wall was on the phone asking about the herbal tea for his new employer. I told him where he could get the bulk herbs and six months or so later, he sent along thanks from Ms. Taylor. The tea, he said, helped her get through Betty Ford.

Sleepless in the saddle. If Ebola was the phantom pandemic of the past, sleep deprivation is the real pandemic of the present. Experts estimate that over one-third of Americans get too little sleep each night and up to 60 percent suffer some sort of sleep deprivation on a regular basis. It’s a situation that is frustrating and unpleasant for sufferers and dangerous to health.

In our techno, always-on modern society, sleeplessness is common. Riding our computer chairs or staring at our iPads and televisions that keep us connected to the world no matter what time zone, we careen into a daze that only sleep can cure. Though all we seek is the seductive succor of somnolence, sleep eludes us. Desperately, we try all manner of remedy, often with fatal results. In the extreme, we see the Michael Jacksons and Heath Ledgers. But sleep dysfunction is not an affliction limited to the Hollywood elite and their concierge physicians. Americans spend about $24 billion yearly on drugs and remedies for passage to the realm of Morpheus.

Sleep experts cite many causes of insomnia. Often they lump these perceived causes into a category called “sleep hygiene.” It’s the personal activity or habits that surround a person’s sleep behavior.

While many so-called experts suggest keeping television out of the bedroom, using the bed only for sleep or sex, retiring at a reasonable hour, eating early and light, avoiding alcohol and caffeine, keeping the bedroom at a cool temperature, keeping lights off at night and on and on, those are but behaviors. After you try all those and you still toss and turn, what is the final cause that keeps one awake? It’s the mind. With thoughts spinning like a whirligig in the wind, no manner of behavior quiets the mind enough for sleep to penetrate.

The typical medical response to the complaint of insomnia is a prescription for a drug that can knock us out. The obvious is that those drugs don’t cause sleep. They render us unconscious. No drug can cause sleep. Neither, for that matter, can an herb. It’s just that no matter how much valerian tea Michael Jackson could have consumed, it’s not going to have the effect that propofol did.

The aftereffects of the knockout drugs leave the user groggy and foggy in the morning so the cycle perpetuates with caffeine and energy drinks, drugs like Ritalin, Adderall and a newer “wakefulness” drug, Provigil.

Wide awake. Blogger, writer and journalist Patricia Morrisroe describes herself as a “fourth-generation insomniac.” What that means is anyone’s guess but Morrisroe’s book, Wide Awake, chronicles the desperation felt by many sleep-deprived Americans. She describes her search for an answer to her life-long insomnia.

Her journey is parallel to that of millions of Americans, if perhaps a little spendier. She tried sound machines, earplugs, special mattresses, psychology, analysis. Her list of prescription drugs read like the contents of Anna Nicole Smith’s medicine cabinet. She tried Ambien but that didn’t work.

“My sleep doctor wanted to put me on doxepin,” she said in an interview. “I didn’t like it; it gave me hallucinations. We went on to Lunesta; I didn’t like that.”

Mind over, well, mind. When it’s the relentless out-of-control thoughts that keep us awake, it’s time to look to the source of insomnia, it’s cause. When all is said and done, it’s the mind that holds the key.

Training the mind to relax, something that is a natural state but that we have turned away from in our obsession with “busy-ness,” is what Morrisroe found, first in hypnosis and finally in meditation.

In a world that has surged to a 24/7 wake-cycle, taken that “Five Hour Energy Drink” to an exponent of five, retraining the mind to think less may sound daunting. It would be if it weren’t so natural. And now, Ms. Taylor, rest in peace.