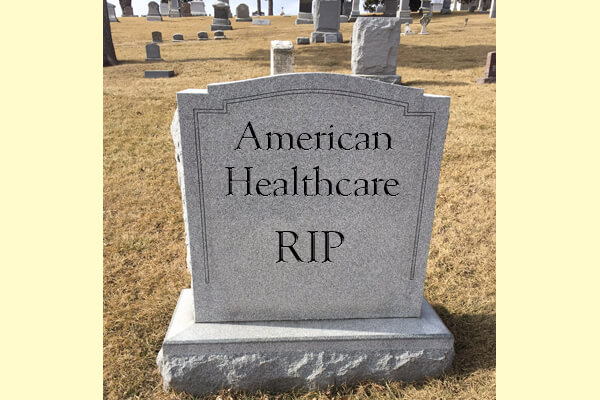 It would be nice to write something documenting all the fantastic healthcare workers we have in the region. Acupuncturists, herbalists, massage therapists, hypnotherapists, yoginis and meditation teachers — to mention a few categories. And to be sure, there are some fantastic surgeons, emergency room docs and care nurses doing outstanding work. The obvious demarcation between those two distinct groups is the division between being part of the American healthcare system or not. No one would put the first group of practitioners in the conventional model. They operate on that old-fashioned principle that healthcare is a covenant between the provider and the recipient. The other group, conventional practitioners, has to deal with a third-party go-between that runs on its own directive. In the healthcare system, that directive is fueled by profit motive.

No one wants to argue that the American healthcare system is anything less than a complete failure when viewed in the overall. But most people think that the system is fixable. It isn’t. The very infrastructure, the very profit-motivated genetic makeup of the system is not broken. It’s irredeemable. To say that American healthcare has lost its compass and needs to find a better path is to believe the Titanic just needs to restart the engines and can still make it to port. Ain’t gonna happen. Before a new American healthcare system can rise from the ashes of the basket of deplorable corporations that run the current dead one, some things have to happen. Planting a crop in a field that has been ravaged by erosion, toxic chemicals, left devoid of any biome whatsoever would be impractical until the soil is remediated. In that sense, here, in no particular order, are a couple things that need be done before we launch a new, better system.

End Direct-to-Consumer Ads. Only New Zealand and the US allow advertising of prescription drugs direct to consumers. The rest of the world seems sane. How did this happen?

In 1914, a doctor and an inventor began marketing a diluted version of a commercial floor cleaner as the world’s first over-the-counter mouthwash, known as Listerine. They had a cure for an everyday common condition, bad breath, but it wasn’t until the 1920s that their product took off when they invented a “disease” that it could cure: halitosis. Since then, the American medical system has been “medicalizing” natural events like menopause and inventing diseases that turn healthy people into patients. Once Big Pharma was able to take the message right to the gullible public via television — based on a decision in the late ‘90s by the Food and Drug Administration — prescription drugs have become the cash cow of the medical system.

Perhaps the single-most overlooked generator of inflated cost and manufactured need for our techno-pharmaceutical medical system is the saturation marketing of drugs and medical services directly to the consumer. Persuasive ads across all media platforms, and especially television, convince the consumer that if he or she doesn’t have a diagnosed disease, it’s probably only because they haven’t been to a doctor yet. And when they go, be sure and ask for “x”, “y” or “z” drug. Critics have long since pointed out that the practice of basically inventing maladies, known as “disease mongering”, where none has previously existed, virtually creates pseudo-epidemics that justify the consumer demanding advertised “cures.” Remember how restless leg syndrome, social anxiety disorder, ADHD, Motivational Deficiency Disorder, Female Sexual Dysfunction just suddenly appeared in the lexicon? When there is a “disease” attached, it’s easier to sell a drug, even if its side effects will kill you and add billions to the cost of healthcare in the US.

In 2015, the American Medical Association called for a ban on D-to-C drug ads. Stay tuned.

American Diet Kills. It will be impossible to resurrect a decent healthcare system unless we realize that our tax dollars subsidize Big Food, a system that is contrary to health. The kinds of food we produce and the methods we use to grow it will assure a steady supply of sick people to inflate the customer base for Big Medicine. Or haven’t you noticed that the majority of Americans are dangerously overweight? Worse, they are undernourished. Industrially produced food, whether plant or animal, is overusing drugs, chemicals, technology, resources, pesticides and giving us food that minimizes nutrients for the sake of appearance, shelf life and convenience. Come on. Do we really need to produce a GMO apple the entire point of which is that it won’t display a bit of brown tint when cut? Clue: That hint of brown is due to oxidation, a sign of the breakdown of a food. Oxidation is needed to digest food. Change the structure of a food so it doesn’t oxidize, guess what? I’ll let you figure it out.

Profits or People? Drug companies, insurance companies, hospitals and medical schools — all are interested in maximizing profit. And they’ve created in the consumer a belief that they are all needed simply to maintain health. Wrong. They may be needed in the case of severe illness. But health, when supported by nutrition and lifestyle choices, is a natural event that needs no medical attention. There must come a way for the American health care system to spring anew with a business model and payment structure that emphasizes people and health over profit and expansion. Drug companies need to focus on inventing lifesaving drugs and not on drugs that are designed simply to maintain a certain function that would be better addressed by lifestyle and nutrition. Hospitals need to be patient-centered and not focused on procuring a multimillion dollar grant to build a new wing or acquire yet more land. And it needs to be done before it’s too late.