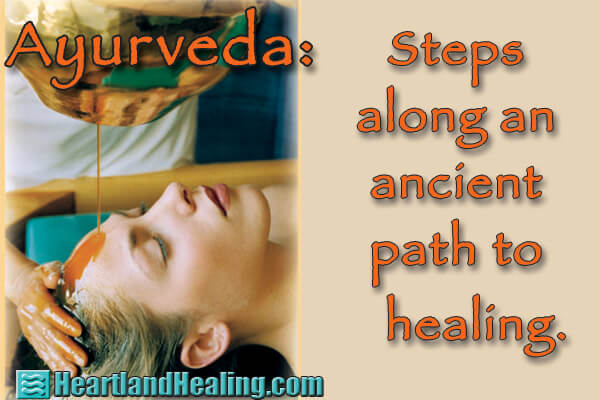 Ayurveda: Steps Along an Ancient Path to Healing

Living in America, or any Western country, one would find it hard to believe that surgery and drugs were not always the “go-to” response when someone got sick. In fact, ancient medicine used to spot imbalances way before they became grossly manifest. Modern medicine is still trying its darnedest to spot illness early but so often the techniques and methods used end up being controversial (mammograms), inaccurate in providing false-positives and false-negatives (PSA tests), or clearly useless (annual pap smears). In fact, medical researchers agree that a vast number of tests and procedures commonly practiced by Western medicine are useless or dangerous.

Enter time-tested medicine. Years ago, cardiologist Richard Collins told me, ”Western medicine has become too procedure-oriented,” he said. “It’s the procedure that we charge money for and that’s what is the basis of operation for conventional medicine. We need to look into the cause, not simply treat the symptom.” A 6000-year-old medical system called ayurveda does just that.

Ayurveda is an holistic approach to healing and health. Documented in the ancient Vedic texts of India, ayurveda observes the subtle levels of existence and recognizes we are made of energy. Ironically, this viewpoint is supported by modern quantum physics. In fact, quantum physics theories that we think are so new were laid out in the Vedas, only in Sanskrit terms. Energy is what influences the physical state that we know as bodies. Consciousness (energy) is primary;  body (matter) is secondary. To maintain lasting health, we must address the cause (energy), not the effect (body).

In a simple sense, ayurveda notes that if the energy flowing in the body maintains a state of balance, the body assumes its natural, healthy condition. If unbalanced, disease results. Ayurveda detects imbalance and encourages natural steps to health.

Ayurveda identifies the three main energies as  doshas.  Each is characterized by basic traits. Vata, the primary dosha, is seen as the energy of movement, identified with the metaphor of air.  Pitta  is the dosha of metabolism, drive of all sorts. It is fire-like. Kapha has the character of weightiness, earth-like. Each of us has a balanced combination of all three doshas and their balance defines our basic mind/body type. Ayurveda has a particular method of addressing imbalances and reestablishing harmony within the body. It is called panchakarma, loosely translated from the Sanskrit as “the five steps.”

The Raj. I experienced panchakarma first-hand years ago at the four-star resort/healing center in Fairfield, Iowa known as The Raj. My visit began with an exam by then-medical director Christopher Clark, M.D., a graduate of Yale medical school, trained in Maharishi Ayur-Veda.

“A patient is not an isolated entity,” Clark said. “He is connected to the rhythm of nature; everything he interacts with. This is a wider perspective and makes one a better physician.”

After taking my narrative history and discussing any medical concerns, Clark used an ayurvedic technique known as nadi, or pulse-diagnosis.  “The pulse flows through the entire body and indicates imbalances in the doshas and where blockages are. It’s not a difficult technique to learn, but it takes years of experience to perfect,” he said.

Step by step.  Clark’s prescriptive orders for me included a specific list of herbs to infuse the sesame oil set aside for my private use during my treatments. The first of the five steps is oleation, (in Sanskrit, snehana), using natural oils to prepare and lubricate the body for treatments. Next is purging (virechana) of the body internally by the use of natural laxative herbs. Third is steam cleaning of the pores in a sauna-like room (svedhana). Next is basti, the use of herbal enemas. Fifth is nasya, the cleansing of the sinuses and nasal chamber. All of these steps have different options to accomplish them.

My first treatment was a tag-team massage known as Abhyanga performed on one of the exotic, oversized mahogany therapy tables, slightly inclined and designed with an oil-catching trough around the perimeter. All of the therapists at The Raj undergo intensive training. My masseurs were from India.

Over the next three days, I received Udvartina, a massage with a specialized herbal paste; Garshana, a dry massage using silk gloves; Vishesh, a deeper muscle massage. Then came Swedana, a heat treatment to loosen toxins further; the popular Shirodhara, a steady stream of warm, herbal oil from a basin suspended over the forehead. Pizzacilli was the most exotic. Using gallons of my specially prepared herbal oil, two technicians bathed and massaged me in a flood of heated oil from two hoses. The temperature is slowly increased with my head cooled with herbal oils. Pinda Swedana takes three technicians rubbing vigorously with silk boluses of herbalized rice and milk.

Along with pure, vegetarian epicurean meals, light yoga, evening lectures and each day filled with the coherent energy at The Raj, panchakarma is five giant steps toward health.