Home » Heartland Healing » Back to Basics 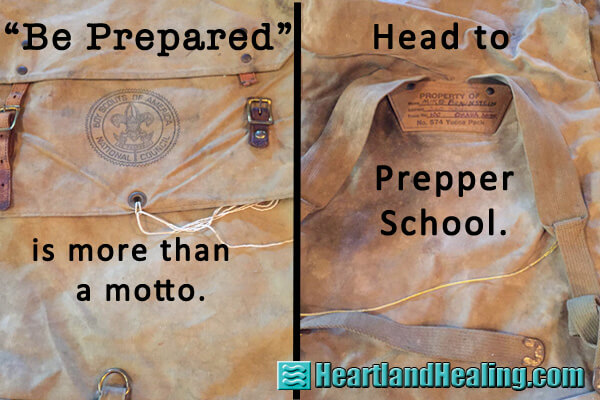 “Be Prepared.” I’m not certain when I first heard that. Although it’s actually the Boy Scout motto, it was embraced by my Cub Scout Pack when I was eight or nine years old. It’s a simple phrase but understanding how to prepare when it means your survival is something that most Americans don’t really grasp.

Does “Be Prepared” mean to have a backup cell phone battery? Perhaps. Does it mean to have some mad money on hand for that impulse shopping spree or some extra tissues for a child’s upset? Or keep an umbrella in the car, a Power Bar in the glove box for that late afternoon sugar crash? I suppose it could mean all those. But in the Scouts way back when, it was a little more basic.

Rule of threes. Basic? How about “air-, water-, food- basic”? Rule of thumb is that a human can survive three minutes without air, three days without water and three weeks without food — provided that one is in a survivable environment, not at altitude or in freezing weather. Water, food, shelter: That’s what “Be prepared” meant at the very basic level back when I was a Scout.

In our modern, high-tech, industrialized and urbanized world, our basic needs are met by community effort. Food is at the corner store. Water comes from a tap. Heat comes from centralized delivery systems. Those systems are more fragile than we think and can be disrupted wholly or in part by natural disasters, chemical spills or terrorist and military actions. When any of those things happen to a city, state or region, we see our local and federal government agencies step in to bring water and food and provide shelter. But that wasn’t enough in Flint, Mich. where residents have been without drinkable tap water for years. It wasn’t enough in New Orleans after Katrina. In 2014, 300,000 West Virginians were left without water for months after a chemical spill. Water had to be trucked in.

But what if a disaster struck that taxed the federal government and local agencies beyond the ability to respond? It wouldn’t take much. It nearly happened in the late summer of 2017 when a sequence of hurricanes struck Texas, Florida and the Caribbean. Then wildfires devastated entire cities and counties in California. And since Hurricane Maria swamped Puerto Rico in September, most of the island is still without electricity and water 23 days later. One more tipping point and what would happen to millions of Americans?

Self-reliance. We have become a society that depends on governmental infrastructure for our survival needs. The biggest difference between Americans of 100 years ago and today is our relative inability to account for ourselves and our needs. What would you do if water stopped coming from your tap and trucks no longer restocked the local grocery stores after a couple days? What if that shortage lasted for days, weeks or even months? What if your car did not run, your house was without heat or your prescription drugs were unattainable? Could you survive at all? Few Americans can answer that with a “yes”.

Long term survival would indeed take some major planning and skill set. But knowing how and being prepared to get over the first initial three days to three weeks to three months is something nearly everyone can do. It would start with a “bug-out bag”, a survival pack.

The basics. Water, food, shelter. Immediate concerns can be met with a supply of water in five-gallon jugs and a stash of canned foods in the basement or closet — provided that your home base remains inhabitable. You could easily live on a stash of canned tuna, bottled water and Cheerios for three days. But imagine something really catastrophic happening that would shut down the survival grid for months. It’s not unrealistic. In fact, it’s one of the things our government fears most. Your self-reliance and survival skills would be taxed beyond limit.

In years past, say 100 years ago or so, most Americans at least had some idea of how to find water when needed and knew how to perhaps hunt or fish or forage. Could you do that now? Do you even own any matches let alone know how to start a fire from a flint and steel? Of course, 100 years ago one could drink the water in our rivers. Even when I was a kid, it was relatively safe in most rugged areas. No longer that easy.

Online bug-out bag advice a joke. Don’t rely on the internet to teach you how to survive. I googled <bugout bag checklist> and here’s the top items the internet says to include: “Wet naps, hand sanitizer, camp soap(?), a hygiene mirror, toilet paper, toothbrush and toothpaste, other personal hygiene necessities.” Is that list for a trip to the mall or to your Tinder date? It certainly does not address what you actually need to survive. Wet naps?

Travel light and travel right. Whether you’re stuck at home for weeks on end or have to abandon shelter, you should take the time right now to educate yourself to become self-reliant. Learn what you may need to really survive without governmental support. Can you find water in the wild? Do you know how to purify it? (Life Straw) Hear weather reports? (Hand-crank radio) Access food? (Learn foraging, survival rifle, fishing line) Make a shelter and build a fire? (Mylar blanket and flint kit). Grab your Boy Scout Handbook and “Be Prepared.”

Note: There is a preparedness convention in Lincoln October 21 & 22. (Link Here)