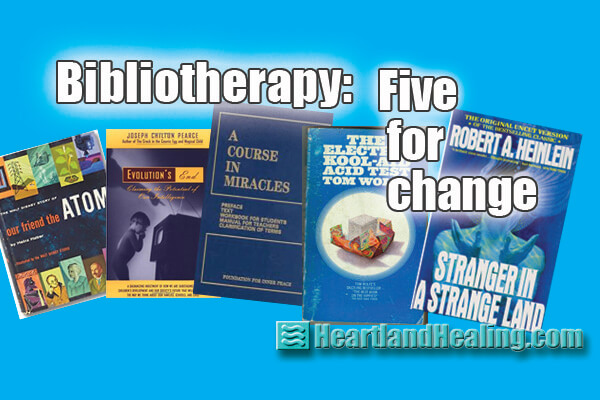 I guess it peaked in the “Me Decade” of the 1970s, (coined such by the late Tom Wolfe.) Gurus then, of one sort or another, were a dime a dozen. Books to help you help yourself were just about the same going rate. The Road Less Traveled, (hated it); Creative Visualizations, (meh); Zen and the Art of Motorcycle Maintenance; I’m Okay, You’re Okay, (puh-leeze!). The list fills dusty library shelves in Baby Boomer homes. Not that some of the publications weren’t… well, interesting… but the celebrants were so often self-appointed. In only rare instances, by my experience, do books that actually set out to be preachy self-help books by nature accomplish the goal of imparting wisdom. I’ve found that inspiration comes from unintended sources. To that end, I offer five titles not necessarily ‘70s books, that, when read and absorbed, could channel inspiration in such a way as to make profound change in a person’s perception and therefore their life path. These would change your life. Have at it.

Our Friend the Atom (1956)  It’s a children’s book penned in 1956 by Walt Disney and a refugee scientist from Hitler’s Germany, Hans Haber and illustrated by Disney Studio’s genius artists. Think of this: The world was mostly ignorant of what an atom or atomic energy was prior to the publication of this book. It had been only ten years since the explosion of two nuclear devices at the end of World War Two. The entire concept of what an atom is eluded most folks. But even a child, in reading that book, would come away with a clear understanding that the world, our bodies, the entire universe, is made up of nothing but pure energy and is not solid matter at all. To learn, understand and act on that knowledge is the first fledgling step to true wisdom. What you “see” is not real. Trust Disney.

Evolution’s End (1992) When I first saw this title I thought it was a pessimistic piece about the cataclysmic close of mankind’s evolution. No. It actually means more like evolution’s designed goal. Joseph Chilton Pearce, a genius, melds the metaphysical with hard science to make sense of all the woo-woo New Age stuff we heard about since Western culture first engaged the insights spawned by millennia of Eastern sensibility. Chilton makes it clear that mind over matter makes sense scientifically, though the reader will have to draw that in their own conclusions. It is a mind-bending book that received nowhere near the attention it deserves. (A companion book that Pearce mentions frequently is Boiling Energy by Richard Katz. Can’t believe I gave that away.)

A Course in Miracles (1975) Well, here you are. If you had one book to take with you to a new planet, this would be it. Actually, it’s three volumes: Text, Workbook and Manual for Teachers. By the mid-1980s it was combined into one three-part volume. It is a channeled text scribed by a Columbia University professor, Helen Shucman. It does nothing other than completely correct the thinking of the world, placing the role of cause and effect in its proper setting. Thought creates; the physical world is an illusion and there is a way to see past this world and still be in it. Forgiveness and the utilization of relationships is key. Connection with a guiding inner awareness, unabashedly called “Holy Spirit”, is a clear and present reality that can be used to guide life without conflict. Peace of mind is a solid state reality that is possible, indeed natural, when correction is made. Some find the Course challenging. When the foundation of what the world teaches us in threatened, it can indeed be daunting. The Course reassures: The way is not difficult but it is different. Go for it. What have you got to lose?

Electric Kool-Aid Acid Test (1968) A crucial part of life is understanding. If anyone living in the Western world would like to understand how we got here from there, just read Tom Wolfe’s remarkable account of traveling with Ken Kesey’s Merry Pranksters carrying the message of “perception is malleable” throughout the Southwest in the late ‘60s. Hallucinogenic drugs taught all of us the unmistakeable truth that changing your mind changes your world. Wolfe documented the Merry Pranksters and their travels on the psychedelically painted bus named “Further” as they hosted concerts by an unknown, up-and-coming band from the Haight called “The Grateful Dead”. Dances in school gyms and liberty halls were stocked with tubs of LSD-spiked Kool-Aid. To understand you had to take part. To understand you had to be “on the bus or off the bus.” Trust Wolfe.

Stranger in a Strange Land (1961) My guess is that you probably have not read Stranger. You should. No less than the Library of Congress named the book by science fiction writer Robert Heinlein one of the 88 “books that shaped America.” Heinlein wrote of the character Valentine Michael Smith, returning to Earth as sole survivor of an expedition to Mars who was raised by Martians and demonstrates the advanced psychic abilities and mental power of that race of extraterrestrials. Heinlein describes a culture on Earth that presages a global society much as we see it now. Religious fervor and polarized segments rule the day. Smith becomes an avatar for change. The results are at once uplifting and depressing.

It seems to be significant that each of these books, so powerful, have yet to be successfully adapted to the watered down versions they would be in a movie. So you must read and absorb them. But only if you want change.