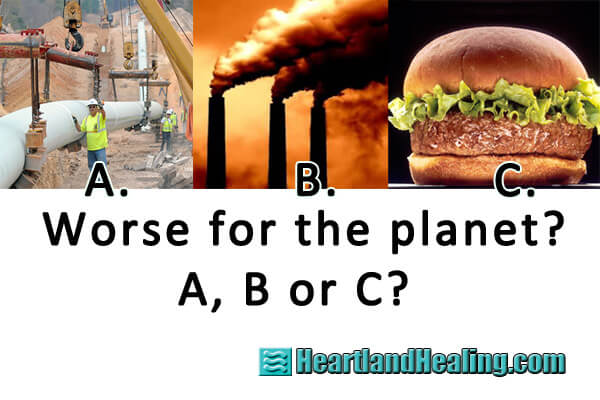 Eco-warriors, you make me laugh. All the focus on pipelines and carbon taxes and how “bad” the current administration is in dealing with climate change is so far off the point that I cringe to hear your complaints. Get real. You want to do something that will curb global warming, have an enormous impact on the quality of your lives and of the health of the planet? Then give up your crappy, deadly, Earth-destroying cheap meat. That’s right. That 99-cent burger you crave or the $5.95 triple-deluxe bacon-burger is what is killing you and our planet. And don’t forget those phony-ass “chicken fingers.”

Now, check this out. I’m not saying eating meat is the culprit. I’m not even saying beef, or chicken or pork are the problem. What I’m saying is “cheap meat” has a devastating effect on the planet and your health. Just my opinion — that happens to be based on some serious research and data provided by some serious organizations.

If you could just get your eco-heads out of your eco- , er, the eco-sand, then you could see you are failing to accomplish anything but a symbolic gesture by stopping pipelines that are dead in the water anyway. Not that symbolic gestures are bad. They’re just symbolic is all. Not really effective.

Livestock’s Long Shadow. That happens to be the title of a piece of work by the Food and Agriculture Organization (FAO) of the United Nations that was published just over 10 years ago. I’ll summarize for you with one sweeping observation from the 391-page PDF: industrial livestock production contributes more to the greenhouse global warming effect than the entire transportation sector. That means, if there’s a bogey man in the battle against climate change, it ain’t Trump, it ain’t Big Oil (though they are baddies), it ain’t pipelines, Jane. The real bogey man is the livestock sector that does more damage to the planet than any other. Let’s see you take them on.

Historical perspective. Most readers don’t remember but South Omaha was once the stockyards capital of the world, vying yearly with Chicago for which city could kill the most cattle and pigs. That area down near what is the Livestock Exchange Building? It was acre upon acre of mooing, oinking, bleating flesh on the hoof, each animal waiting to meet its destiny at the long end of a chute and the wrong end of a butcher’s blade.

I was taken there in sixth grade on a Cub Scout field trip. Some parent with an “in” at Armour got us free access to the entire plant, even the killing floor where we watched squealing, writhing pigs chained upside-down by their back leg on the ground floor, then wrenched two stories up to a shuttle line that carried them over a grate floor where a guy in a rubber apron very deftly poked them once in the neck with a twelve-inch blade to release a burgundy flood of steaming blood. I didn’t last too long watching that.

Out of sight. Out of mind? Why share that story? To inform that the livestock industry used to be an urban development where the stench, effluent, environmental destruction was in plain view of everyone. We actually used to know how our meat was rendered for our table. I knew that the pork chop in that Hinky-Dinky meat case came from the abattoir down at 29th & Q. I knew fully what happened there and could wonder where all that pig shit and cow manure was going: into the sewer and eventually into the Missouri River.

Now, where are all the slaughter houses? Can anyone of you tell me? They’re “off the grid” and out of sight. They are as far out in the country as you can get. You can guarantee that no Cub Scouts are getting tours and taking videos with their iPhones.

It starts with corn. Over 90 million acres of corn are grown each year in the United States, almost all of that within the Missouri/Mississippi watershed. Over 75 percent of that corn goes to ethanol and livestock feed. The soil depletion, pesticide runoff, erosion that flows down to the Gulf wreaks havoc and helps create dead zones where nothing in the ocean can live. The 2017 dead zone was measured by NOAA to be the largest ever at 8,776 square miles, the size of New Jersey. The cheap, subsidized feed corn is part of that industrial livestock problem.

Eat meat, less of it and the right kind. There is no doubt the historical record shows that humans have eaten meat for a couple million years. I eat meat. I have a lot of thoughts about whether we should have evolved past that yet. But one thing I know is certain, there is a right way and a wrong way to raise and process livestock for our tables. Doing it in large-scale, environmentally destructive ways is not right. Doing it in small-scale, “humane” ways is. The problem emerges when we rely on industrialized production to provide a meat-like substance for that cheap burger or bacon. We pay a low price at the fast-food counter but we pay a much higher price later. Wake up, eco-freaks, and start paying attention to the bigger problem. It’ll be good for you and better for the planet.