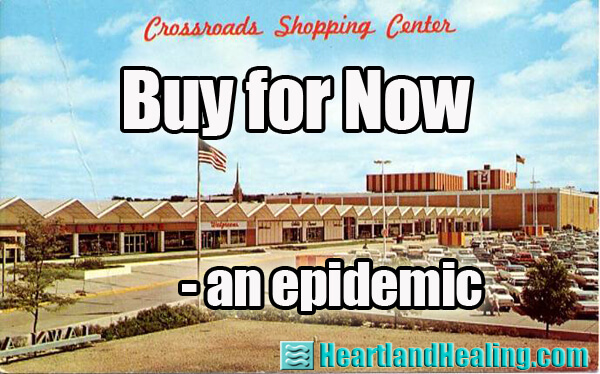 I’m not certain of the year but it was sometime in high school. I know I had my driver’s license. I know the day. It was a Saturday. I was bored, just feeling out of sorts. And I guess it was the first of only two times in my life that I can recall ever feeling what I would call depressed. But I had a car at my disposal and a destination in mind. It was the relatively new shopping mall called “The Crossroads.”

I headed out with no specifics in mind on an overcast and chilly day in November. I found a parking place and walked through the doorless “air fence” near Brandeis that admitted shoppers to the main drag of the mall, a long corridor with stores on both sides of the walkway.

The place was crowded. Single people, couples and mostly small family groups with a mom, dad and a couple kids in tow. I ambled, without a goal. I was no further along than the central agora before I noticed that my mood was lifting. I wasn’t sure what to attribute the change to but I was observing that most all the people I looked at seemed to be in a happy sort of daze. In one sense, they were oblivious to others around them and in another sense, keenly aware of all the items offered them in store windows, aisles, endcaps and racks. They were all awed by things, just plain “things”. I connected the dots.

Apparently, something about being around all that merchandise, all that product, all that temptation was making people happy. It did not go unnoticed by me. Shopping was making these people “happy”. Consuming appeared to give them peace of mind, much like supplicants sitting in view of the Rapture. Was shopping America’s new religion?

Consumeritis americanis. I was a sort of science fan on my way to pre-med. Biology and anatomy and pathology were among my favorites. By the time I was on my way home from the mall, I had coined my term for what I had seen: Consumeritis americanis. Americans, by the 1960s, had passed the age of post-war recovery and entered the age of affluence. There were more products and more things to buy than at any time in history and Americans were just beginning to experience the high that buying and consuming brought.

There is indeed a biology behind shopping and pleasure. Decades later, researchers did brain scans and the like and found that neurons and neurotransmitters that were the “feel good” hormones like dopamine and serotonin are released during the shopping experience. That’s the physical manifestation of it. But what is at the bottom of the experiential drive to shop, buy, own? That’s beyond science to some degree.

Agoraphilia. Years later, I would discover another joy-bringer. People were flocking to farmers markets. Certainly, there is a potential to buy and the potential to “shop.” But was there something else? It turns out that there is a human need to be around other humans and some researchers found that people shopping at farmers markets had a higher degree of satisfaction and happiness than shopping in other venues. The only real difference was that they were among people, out in the marketplace and in what passes for modern society’s “town square.” I manufactured yet another term for that feeling of happiness: agoraphilia.

Clicking the “Buy” Button. But we’ve moved beyond the agora, the open market place where people gather. The “high of shopping” can be be experienced in the privacy of your own bed with an iPad, iPhone or laptop and a quick trip to amazon.com. That’s what we’ve latched onto now. What drives us then? Is it FOMO – “fear of missing out”? Fear of “not having”? Joy of accumulation? What drives humans to consume and consume, often without need? If it isn’t rational, mustn’t it be some kind of pathology?

Like any kind of pathology, there are symptoms and in this case they extend beyond the primary human host. The source of all “products” is, of course, the planet. Sooner or later, the source materials are depleted. Many of them are becoming rarer and rarer. Eventually our financial systems, even though no longer based on gold or other precious metals, will see the result of over consumption. Worse, the effect on the very health of the planet is affected by our consumption.

But the outlook is optimistic if we recognize one thing. The organism Earth has an almost unlimited capacity to heal itself, much like the human body. If we get out of its way and begin to walk with a lighter footprint, learn that “living large” may lead to not living at all, and that it’s ok not to have the latest and greatest thingamajig, the Earth can recover. Our only question remains: will we be around to nurse it back?

Heartland Healing is a metaphysically based polemic describing alternatives to conventional methods of healing the body, mind and planet. It is provided as information and entertainment, certainly not medical advice. Important to remember and pass on to others: for a weekly dose of Heartland Healing, visit HeartlandHealing.com. and like us  on Facebook.