Home » Heartland Healing » Can I Buy You a Drink? 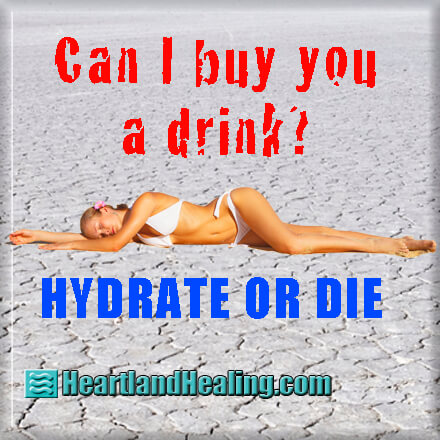 For millions of years, thirsty animals, including humans, in order to stay alive could simply drink water found everywhere, running in streams and lakes. Even as kids camping in the Rockies we safely drank water from mountain streams. Now there isn’t one stream in the Lower 48 that I would dare drink from. And the United States Geographical Survey and the Environmental Protection Agency agree.

Even the ancient Romans had to address water pollution. Heavy metals from their weapons foundries polluted aqueducts. The Chinese of 200 B.C. advised boiling water to make it safe. Egyptian pharaohs had their scientists filter water through charcoal 3500 years ago. The ayurvedic Hindus of 2000 B.C. described various ways of purifying water by filtering it through sand, seeds or exposing it to ultraviolet light (the sun). Ancient Greeks and others used fabric wicks to draw water from one vessel to another, with the wicks capturing the offending particulate matter.

Our modern water treatment operates in much the same way. Chlorination is the primary anti-bacterial process used by most utilities. If ordered to test for a pollutant by government regulation, utilities do so. Unfortunately, the number of chemical threats to our drinking water far exceeds what the government mandates utilities to test for. Many of those make it through the process and are detectable in tap water, including residual pharmaceutical drugs. Drinking tap water wouldn’t be my first choice for clean water.

But drink we must, or turn to dust. So what options are there?

Bottled Water? Nah. The taste of tap water and the presence of undesirable chemicals lead some people to bottled water. People pay as much for a small bottle of “purified” water at a concert or event as for a cocktail. A time-traveler from the 1960s would be shocked to see that we actually bottle and sell water. And that people buy it!

Bottled water will hydrate you the same as tap water but the real difference is the impact on the environment. Each year, Americans buy 50 billion plastic bottles of water. Though made to be recycled, 86 percent of those bottles end up in landfills. 20 million barrels of oil are needed to make the plastic and the carbon footprint is enormous. Plus the plastic bottle leaches bad chemicals you don’t need for rehydration. These are some of the reasons cities and college campuses are banning plastic water bottle sales. That’s good enough reason to stop using water bottled in plastic.

Neon Colored Sport Drinks? No Way. Gatorade is the granddaddy of sports drinks concocted to rehydrate after and during vigorous exercise. It was developed in the mid-1960s to help University of Florida football players rehydrate in the severe conditions of summer football in Florida. There are now several versions and many competitor drinks of the same ilk.

The typical ingredients of a sports drink include carbohydrates, sweeteners and electrolytes. The idea is to replenish what may be lost in vigorous exercise. The electrolytes help move the liquid into the body faster according to Gatorade’s promotional materials.

The down side of sports drinks is the unknowns. Exactly what chemicals are in it? What makes it that weird neon green color, for example? How about the sugar content? The bizarre flavorings? The original formula actually had cyclamate, now a banned chemical, in it. Some research indicates a slight hydration advantage in some areas during extreme activity. If you’re a Florida football player working out in extreme heat, it may benefit you. In my opinion, sports drinks are a waste of money and plastic and offer nothing more than water dressed up in unwanted chemicals.

Make Your Own. Switchel is a word you probably don’t know. A drink called variously “switchel,” Haymaker’s Punch or ginger water dates as far back as the 1600s in the Western Hemisphere and similar drinks go back even further. Starting with water, you add some vinegar, spice it with ginger and sweeten with honey, maple syrup or molasses. Some historians note that lemon was a favorite additive, also. In the heat of harvesting hay, switchel was a popular drink for farmers in the 1930s. It hydrated and nourished them. The components contain natural elements that are similar to the good things in sport drinks.

Beer. Had to throw this in based only on one limited study conducted by Spain’s Granada University. It has shown that hydrating with beer after a work out is preferable to water. According to Professor Manuel Garzon, beer has been shown to be much more hydrating, and just generally better for you, after any kind of strenuous physical activity. After strenuous exercise, students who drank beer perked up more quickly, and seemed better hydrated then those given water. Gimmicks and exotics aside, water is water. It’s the main thing lost in the heat. Stay healthy. Get wet inside and out.