Home » Heartland Healing » Can It, Why Don’t Ya? 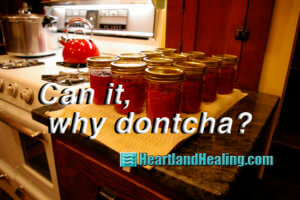 “An army marches on its stomach.”  Napoleon conquered Europe. But he couldn’t have done it without Nicolas Appert. Appert was a candyman, a confectioner. He dabbled with ways of preserving foods. Napoleon, considered the source of that famous quote, offered a 12,000 franc reward to any inventor who could perfect a method of preserving food so that the French army could travel well, carrying food along as they stormed the Continent.

Appert found that placing food inside a container — in his case, glass jars sealed with cork, wax and wire — then cooking in boiling water kept the food from spoiling for extended periods of time. Appert didn’t know exactly why, since Louis Pasteur’s work with food spoilage and microorganisms was over a century in the future. Ignorance does not always trump perseverance and over 15 years of perfecting his process, Appert came up with what we now might call “canning.” As a result, Appert cashed in when he sent Napoleon jars of partridges, gravy and vegetables that were still tasty and unspoiled. Nappy’s army was able to march further and eat better with Appert’s canned food. Thanks in large part to Appert, canning has become one of the time-tested methods of preserving fresh food for the winter months.

A year after Appert won the award, an Englishman named Peter Durand expanded on the idea by preserving foods inside metal, tinned cans. The problem? The can opener wasn’t invented until 30 years later. But at least Durand gets credit for the term “canning,” even if its typically done at home in glass.

Food for all seasons. So you’ve been watering those tomatoes in the back yard or in that balcony pot for the past couple weeks and now there are more than you can eat in a day. Zukes and cukes are popping. Beans and squash are sitting ready to harvest and you don’t know what you’re going to do with all those garden goodies.

Well, if you’re a serious foodie, you have already been performing the magic your great-grandma used to do every summer: putting up food for winter in those historically proven Mason and Ball jars by canning. And if you haven’t been canning, it’s time you learn.

The main methods of preserving food include canning, freezing, drying, pickling and salting. Another simple method for root vegetables and hard squashes is the “do nothing” way of keeping them in a root cellar or cool, dark pantry.

Canning is by far the most flexible and convenient method. All you need is good, fresh, local produce or meats, a canner, jars and shelf space. It’s easier than most people think.

As an example of how easy it is, these are simple steps for canning fresh tomatoes, a tasty reward to be savored in a number of ways come January.

All you have to do is cut up some homegrown or otherwise local tomatoes. Place in canning jars, usually with a dash of lemon juice or vinegar. Put the jars in a canning pot that contains water. Seal the cover of the canner and boil for a specified time, about 20 minutes. Let the jars cool on a towel overnight and put them on the shelf in a closet or cupboard. These are just example instructions. Be sure to follow the directions on the USDA website. Or what your grandma taught you, if you’re lucky.

One of my absolute favorite canning adventures is to make a huge pot of my favorite pasta sauce recipe with garden tomatoes, garlic, oregano, bay and basil. Then can that. Oh, my.

Methods and techniques will vary for different vegetables but there is no scarcity of instructions on specifics. Books, pamphlets and online resources abound, e.g. freshpreserving.com. Whatever method you use to extend the harvest, choosing local is one way to get the freshest ingredients to start with and that means the most nutritious.

Heartland Healing is a metaphysically based polemic describing alternatives to conventional methods of healing the body, mind and planet. It is provided as information and entertainment, certainly not medical advice. Important to remember and pass on to others: for a weekly dose of Heartland Healing, visit HeartlandHealing.com.
2020.07.28